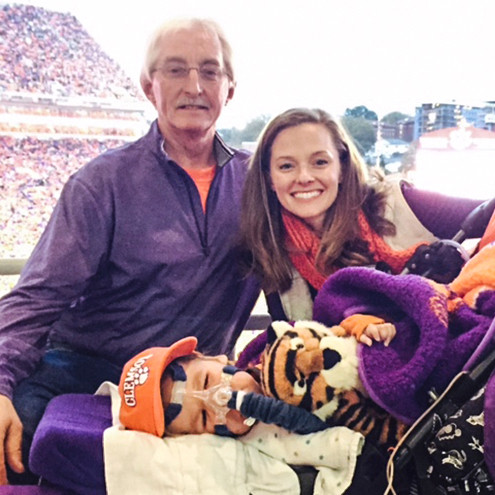 The family of Leo Bugenske, who was diagnosed with Spinal Muscle Atrophy, including his mother and grandfather, both Clemson alums, saw the Tigers defeat Wake Forest at Memorial Stadium on November 21. It was a tremendous experience for the entire family, including Leo.

Below is the story of Leo’s fight written by his mother. For more information on Leo, visit LeosPride.org.

When Leo was three weeks old, he was diagnosed with Spinal Muscle Atrophy (SMA). SMA is the No. 1 genetic killer of young children. SMA is estimated to occur in nearly one out of every 6,000 births and one in every 40 people are carriers. SMA affects motor neurons and causes weakness and wasting of voluntary muscles. The brain is not affected by SMA.

There are varying degrees of severity of SMA, ranging from Type I to Type IV. Leo has the most severe form, Type I. Babies diagnosed with Type I are given a poor prognosis and told the majority will die before age two.

Leo is one amazing boy. He is such a fighter and has such a strong spirit. He is very smart, opinionated and determined. We are honored beyond belief that God chose us to be his parents. We are so incredibly proud of Leo. He brings us more happiness and joy than fear and worry could touch. We are so thankful for all of the support of family, friends and community. We could not do this without you. We are better parents, and Leo receives better care because of all that you do.