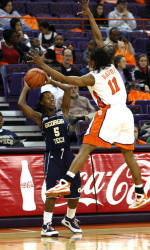 “I’m really honored to be recognized by the coaches around the league,” Hardy said. “There are a lot of great players in the ACC. I just try to play hard and do my best every day.”

The native of Spartanburg, SC leads the conference in defensive rebounding, averaging 6.0 per game. She also ranks second in the ACC for steals per game with a 3.2 per game average. The figure is currently seventh-best in the nation as well. Hardy has totaled 94 steals in 29 games this season, which ranks fourth in Clemson history for a single season.

She is just the third different player in school history to earn the honor. Erin Batth (currently the Director of WBB Operations at Virginia) was named to the team in 2000 and 2001, while Chrissy Floyd garnered the honor in 2002.