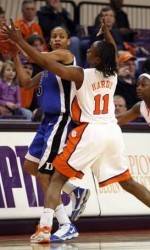 GREENSBORO, NC – Clemson senior Lele Hardy has been named the 2010 Women’s Basketball All-ACC Defensive team as announced by the ACC office on Wednesday. It is Hardy’s second career Defensive Team honor, and comes just a day after being named to the All-ACC second team. The wing player from Spartanburg, SC ranks fourth nationally with a 3.6 steals per game average and second in the nation with 107 steals.

Hardy leads the ACC in steals with 107 in 30 games and ranks second in the league in defensive rebounding, at 5.0 per game. Her 107 steals is one more than her previous career high, set last season. She leads all conference players with 57 steals in league play for a 4.1 steals per game average. She also had a career-high 18 blocks this season.

She has enjoyed a well-rounded season, averaging 14.5 points, 8.1 rebounds, 3.6 steals, and 2.2 assists per game. She ranks seventh in the league in scoring, second in rebounding, and second in steals.

The 5-10 wing player joins Erin Batth as the only two players in Clemson history to earn two defensive team honors, and is the only player in school history to be named All-ACC and All-ACC Defensive in two consecutive seasons.

Virginia’s Monica Wright was named the ACC Defensive Player of the Year by the 12 league coaches. She had 104 steals in 29 games, and ranked 11th in the ACC in rebounding. The other honorees were Shenise Johnson of Miami, Keturah Jackson of Duke, and Jacinta Monroe of Florida State.

Hardy will be back in action on Thursday, as the Tigers take on NC State in the first round of the ACC Tournament in Greensboro, NC at 8:00 pm. The game can be viewed live at theACC.com or heard at WCCP-FM 104.9 FM.