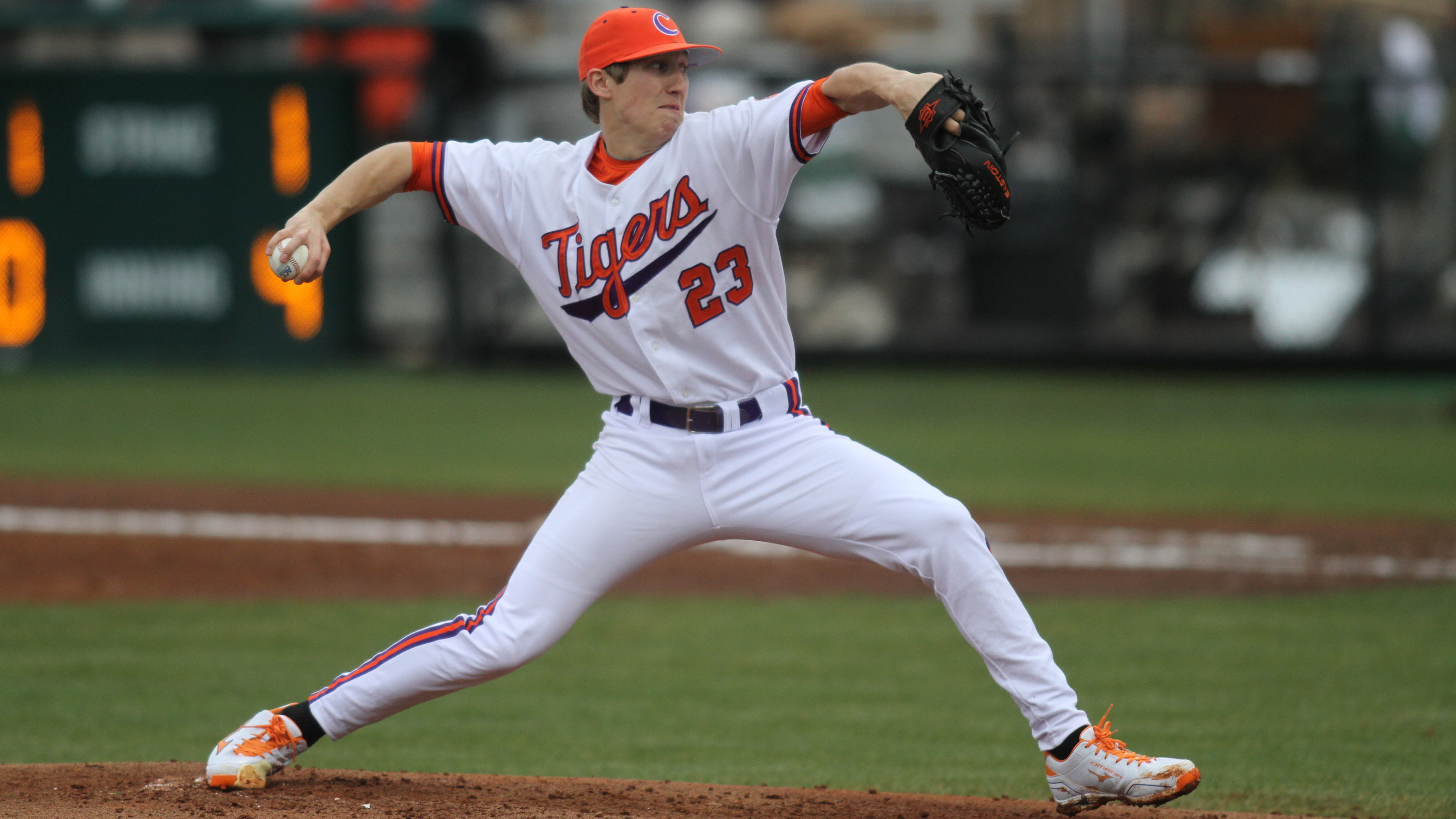 Pinch-hitter Mike Papi hit a two-out, run-scoring single in the ninth inning to tie the score, then hit a solo homer in the 11th inning to lead #12 Virginia to a 6-5 win over Clemson in 11 innings in front of 4,823 fans at Doug Kingsmore Stadium on Friday night.  The Cavaliers, who took a 1-0 lead in the series, improved to 16-1 overall and 3-1 in the ACC.  The Tigers fell to 10-6 overall and 2-2 in ACC play.

The Tigers built a 5-1 lead in the fifth inning, but Virginia scored one run in the seventh inning before plating three runs in the ninth inning to tie the score.  Clemson escaped Virginia’s one-out, bases loaded jam in the 10th inning without giving up a run, but Papi delivered for the Cavaliers in the 11th inning to give them the one-run victory.

Kyle Crockett (2-0), the last of five Cavalier pitchers, earned the win by pitching 2.2 scoreless innings of one-hit ball with four strikeouts against no walks.

Mike Kent (0-1), the last of seven Tiger hurlers, suffered the loss.  He only allowed one of the six batters he faced to reach base, but it was Papi’s game-winning home run.  Starter Daniel Gossett pitched 7.0 strong innings, allowing five hits, two runs, and no walks with six strikeouts.  Clemson gave up six earned runs, ending the Tigers’ 13-game streak of allowing three earned runs or less.

Shane Kennedy gave Clemson a 2-0 lead in the second inning when he belted a two-run homer to left field, his second long ball of the season.  Garrett Boulware, who reached on an error, also scored on the home run.

Derek Fisher led off the top of the fourth inning with a double down the left-field line and advanced to third on Brandon Downes’ groundout to second.  Joe McCarthy then lofted a sacrifice fly to left to score Fisher.

In the bottom of the fourth inning, Steve Wilkerson led off with a double to left field and advanced to third on Boulware’s single to right field.  Steven Duggar flared a single to left-center to score Wilkerson, then Kennedy plated Boulware with a sacrifice fly to right.

In the fifth inning, Thomas Brittle drew a one-out walk and Jay Baum reached on an infield single on a 1-2 pitch.  Wilkerson followed with a single through the left side to score Brittle.

Downes led off the ninth inning with a double off the wall down the left-field line on a 1-2 pitch and McCarthy blooped a single to left field.  Towns struck out as McCarthy stole second, then Howard grounded out to short to score Downes.  Reed Gragnani hit a two-out double off the top of the wall in right field to plate McCarthy, then Papi came off the bench and grounded a single up the middle to plate Gragnani and tie the score 5-5.

Jared King led off the 10th inning with a single up the middle and advanced to second on Fisher’s sacrifice bunt.  After Downes walked on nine pitches, McCarthy walked on seven pitches to load the bases.  But after Kent entered the game on the mound, he struck out Towns and got Howard to fly out to deep right field to end the inning.

Papi gave Virginia a 6-5 lead in the top of the 11th inning when he crushed a solo homer to right field, his second long ball of the season.

In the bottom of the 11th inning, Jon McGibbon grounded a one-out single up the middle.  However, Tyler Krieger grounded into a game-ending 4-6-3 double play.

Branden Cogswell, Towns, and Papi had two hits apiece to pace Virginia, who totaled 12 hits in the contest.

Wilkerson and McGibbon had two hits apiece to lead the Tigers, who amassed 10 hits in the game.  Kennedy had a game-high three RBIs as well.

Clemson and Virginia will play game-two of the three-game series on Saturday at 6:30 PM.  The game will be available live via webcast on ESPN3.