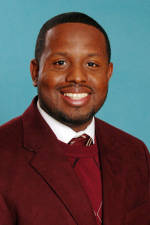 Clemson, SC – Lawrence Johnson has been named Director of Track & Field and Cross Country at Clemson, the athletic department announced Wednesday. Johnson comes to Clemson after serving as an assistant for four years with the Virginia Tech track & field program. Most recently, Johnson served as the Associate Head Women’s Coach for the Hokies’ 2007-08 season.

“This is a fantastic opportunity to continue to build upon one of the most storied track & field programs in the ACC,” Johnson said. “I would like to thank the University, the athletic administration, and the entire Clemson family, for having faith and confidence in my ability to direct this track & field program.”

Johnson, 33, has been one of the top assistant coaches in the country, especially when considering the credentials of his student-athletes over the past two seasons. He coached the sprints, hurdles, jumps, and multi-events for the men and women at Virginia Tech. He was named 2008 Southeast Region Assistant Coach-of-the-Year by the U.S. Track & Field coaches’ association because of his efforts. Johnson’s groups were a big reason the Hokies claimed four straight ACC championships and two consecutive NCAA East Region titles in the women’s program since 2006-07. In 2007, Johnson was named National Assistant Coach-of-the-Year for women’s sprints and hurdles.

“Clemson Athletics is very fortunate and excited to name Coach Johnson as our Director of Track & Field and Cross Country,” said Barbara Kennedy-Dixon, Associate Athletic Director at Clemson. “He is known as a great recruiter and for developing student-athletes into world class competitors. He will certainly build on the strong foundation established with the men’s program and return the women’s program to prominence in the ACC and on a national level. He understands what it takes to build conference and national championship teams, as a coach and as a student-athlete. Coach Johnson will be a great addition to the Clemson family.”

In 2008, he coached Virginia Tech women’s sprinters and hurdlers to historic seasons. One of his athletes, Queen Harrison, earned a spot on the United States roster for the Olympic Games in Beijing, China. Under Johnson’s watchful eye, Harrison became the first female in Virginia Tech athletics history to be named to a U.S. Olympic team.

Also in 2008, Harrison was named Southeast Region Track Athlete-of-the-Year after setting ACC records in winning both the 100m and 400m hurdles at the NCAA East Regional in Tallahassee, FL. Harrison was also ACC Champion in the 400m hurdles and runner-up in the 100m hurdles. She was an NCAA All-American indoors in the 60m hurdles.

Johnson coached another exciting sophomore to great individual success in 2008. Kristi Castlin was NCAA runner-up in the 60m hurdles during the indoor season, then ACC Champion in the 100m hurdles outdoors. She was also All-Region in the high hurdles outdoors after a fifth-place finish in Tallahassee.

Johnson also led the women’s 4x400m relay team to ACC Championships in 2008, both indoor and outdoor. The 4×4 team went on to finish runner-up in the NCAA East Region, while the 4x100m relay also qualified for the NCAA Outdoor Championships. He coached Patrice Potts, the ACC’s indoor 60m champion as well. Off the field, one of his athletes, Sherlenia Green, was a CoSIDA Academic All-American.

The 2006-07 season put the Virginia Tech women’s sprints and hurdles group on the map from a national standpoint. Johnson coached three NCAA indoor All-Americans, as well as three individual ACC Champions. He coached Harrison to All-America status in both the 100m and 400m hurdles, while Castlin earned the honor in both the 60m hurdles and 100m hurdles. Castlin won the NCAA East Region Championship in the 100m hurdles, while Harrison claimed the first of her two regional crowns in the 400m hurdles. Johnson also coached Potts to ACC titles in both the 60m and 100m dashes.

Prior to his four-year appointment at Virginia Tech, Johnson spent two years as an assistant at Southern Illinois. Prior to that stop, he assisted with the instruction of sprints, hurdles, and jumps at the University of Arkansas from 1999-2002. The Razorbacks won back-to-back SEC “triple crown” championships during that time.

Johnson earned an undergraduate degree in kinesiology from Arkansas in 2000. He earned one varsity letter with the Razorbacks’ nationally-renowned program. As a sprinter, he helped Arkansas to four SEC indoor and outdoor championships and the 1998 NCAA Outdoor National Championship. He competed under legendary coach John McDonnell, who retired this year after leading Arkansas to an unprecedented 42 NCAA championships.

In 1995, Johnson was a member of the “triple crown” National Championship track & field team at Blinn College in Texas. He also was a 1996 South Coast Conference champion in the 400m at Long Beach City College before moving on to Arkansas.

Johnson is married to the former Lilly Montgomery, a former communication skills instructor at Virginia Tech. She is a Ph.D. candidate. The couple has four children, Desirae (13), Lawrence (8), Laniah (4), and Lukas (3).