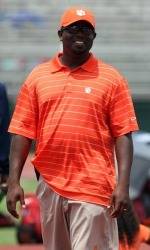 Johnson guided the women’s program to its second consecutive ACC outdoor team championship. It was the school’s fourth straight overall team title in women’s track & field as well. The Tigers defeated second place Florida State by a margin of 69.5 points, the largest since the ACC expanded to 12 schools in 2005. Clemson scored 202 total points, an all-time high for the program and the most in the 12-member era of the ACC. He was previously named Southeast Region Women’s Outdoor Coach-of-the-Year earlier this month.

He took the women’s team to a seventh-place finish at the NCAA Outdoor Championships in Des Moines last week. It tied the program’s highest finish at the outdoor national meet. One of his athletes, Patricia Mamona, earned a second straight NCAA championship in the triple jump. He also coached a national runner-up in Liane Weber (heptathlon) and fourth-place finisher in Alyssa Kulik (3000 steeplechase). Under Johnson’s direction, the Tigers won seven out of 21 events at the ACC Championships and produced both meet MVP winners in Stormy Kendrick (track) and April Sinkler (field).