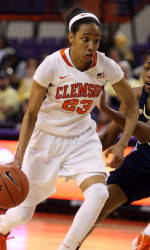 Late Run Propels No. 17/19 Georgia Tech Past Clemson on Sunday

ATLANTA – Georgia Tech used an 11-0 run late in the second half to pull away from Clemson for a 62-50 win at Forbes Arena on the campus of Morehouse College in Atlanta on Sunday. The Lady Tigers (6-21, 2-14 ACC) will play North Carolina in the first round of the ACC Tournament beginning Thursday in Greensboro, NC. Clemson defeated the Tar Heels in Chapel Hill earlier in the season.It was Tech’s second win over Clemson this season, as they also won, 63-54, in Clemson on Jan. 29, in which they closed on a 7-0 run. Georgia-natives Shaniqua Pauldo and Chancie Dunn led Clemson with 11 and ten points, respectively. Dunn also added a game-high six assists and three steals in front of her hometown crowd. Lindsey Mason also added eight points, which came consecutively in the closing seconds of the first half and the first two minutes of the second half. Mason also added her 70th block of the season, the fifth-most in a single season in Clemson history. Clemson outscored Tech, 28-24 in the paint and 12-8 on the fast break and had seven blocked shots, holding the Jackets to .393 shooting while hitting .417 against the aggressive Jacket pressure. Clemson trailed by just five when Quinyotta Pettaway, who had eight points and seven boards, scored on a put-back and converted on an old-fashioned three-point play at the 11:41 mark of the second half. Clemson was chipping away at what was an 11-point lead for Georgia Tech just minutes earlier. Despite keeping the score within striking distance for much of the half, Georgia Tech embarked on a 13-2 run beginning at the 9:20 mark and pushed the lead to 16 at 59-43 before a Natiece Ford jumper stopped the bleeding temporarily. Clemson battled foul trouble much of the game, with leading scorer Nikki Dixon playing just seven minutes in the first half due picking up a quick two. The Yellow Jackets were unable to pull away despite getting in to the bonus with 9:34 to play and attempting 19 second-half free throws, of which they converted just eleven. Defensively, Clemson held the Jackets without a field goal for the final 6:49 of game time and an 0-6 mark from behind the arc in the second half. It was the third straight game in which Clemson’s opponent shot a higher three-point percentage (.400) than they did within the arc (.390). Freshman Sydney Wallace hit four threes on her way to a game-high 16 points for Tech, who finished with just Wallace in double-figures. Clemson’s Natiece Ford had a personal ACC-best eight points in a career-high 25 minutes, as Itoro Coleman used her to try and create a size advantage for Clemson. In the first half, Clemson protected the rim well, allowing just six points on shots within ten feet. But the Jackets were up to the task, knocking in six of nine shots from behind the arc, led by a 4-4 mark from freshman Sydney Wallace. Pauldo’s nine points on 3-4 shooting led Clemson, while Dunn added six and three assists in 20 minutes of play. Georgia Tech took a 33-25 lead into halftime.The teams traded hoops coming out of the break, as Clemson had a change to cut deeper into Tech’s lead, as Pettaway had a pair of free throw opportunities in a 37-31 game, but came away with just one of two. The Lady Tigers also had a key stop in a five-point game, but a costly offensive foul gave the ball back to Tech, who converted as part of an 11-0 run to help secure the game.