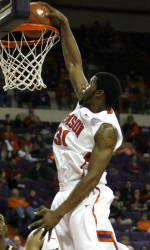 Late Comeback Not Enough as Tigers Fall to College of Charleston, 72-69

Devin Booker led the Tigers with 16 points and 14 rebounds, including seven on the offensive end. Booker hit eight of his 14 shots in the game, two more than Milton Jennings, who had 12 points and six rebounds. Booker’s point total matched a career-high and his rebound total established a new career best.

Andre Young’s had 15 and 10 points, respectively, and both knocked down a pair of three-pointers. Smith had 13 of his points in the second half.

Antwaine Wiggins was the leading scorer for the Cougars, finishing with 22 points on nine-of-14 shooting. He also brought down seven rebounds in the game. Trent Wiedeman and Andrew Lawrence each scored 15 points for the Cougars.

“We knew coming into the game that their starting five could all really score,” Brownell said. “They make you pay for any defensive mistakes. For whatever reason, our team was a little lethargic in the beginning. We missed a lot of shots that we need to make offensively.

“Defensively, we just didn’t have the grit that you need to compete with a team with the talented guys that they have. In the second half, we fought hard and gave ourselves a chance to get back into the game. They had guys step up and make big plays and big shots late in the shot clock. That’s what you have to do to grab a road win, and they did.”

The Tigers began the game cold from the floor, hitting just one of its first ten shots, and the Cougars capitalized, scoring the game’s first six points en route to an 8-2 lead in the first four and a half minutes of the game. The Tigers cut the lead to four at 12-8 on a Booker layup with 13:17 remaining in the half. Booker had six points and led the team with seven rebounds in the first half.

But, the Cougars responded with an 8-0 spurt over the next five minutes. Wiedeman capped the stretch with a bucket, two of his eight first-half points. The sophomore also contributed with six boards in the opening stanza.

The Tigers cut the lead under double digits once more in the first half, at 29-20 after Young’s three-point basket with 3:26 remaining. But the Cougars closed with a 10-4 spurt to finish the half with a 39-24 advantage.

The Cougars took their largest lead at 16 points, 50-34, with 13:46 to play after James Carlton’s jumper. From there, the Tigers began to chip away, using a 10-3 spurt to cut the lead to nine at 53-44 on Tanner Smith fast break dunk. After the Cougars got the advantage back into double digits, the Tigers responded once again after consecutive threes by T.J. Sapp and Young, sandwiched around a stepback three-pointer from Wiggins as the shot clock expired.

With under three minutes to play, the Cougars surged ahead by six thanks to a basket by Adjehi Baru. Then Booker knocked down a jumper and put back a rebound to bring the Tiger deficit down to two with 1:18 remaining. Anthony Stitt made one of two free throws with 14 seconds left, which set up Young’s three-point attempt from the left wing with the clock winding down.

The Tigers will return to action on Tuesday, November 19, as they host Coastal Carolina. Tipoff is set for 9:00 PM in a game that is scheduled to be televised by the Regional Sports Network and simulcast on ESPN3.