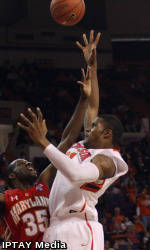 CLEMSON, SC – As they were walking off the Littlejohn Coliseum floor following Tuesday’s 64-62 loss to Maryland, Clemson Head Coach Brad Brownell leaned down to Andre Young and told him, “Keep your head up. We’re going to be alright.” Then he rubbed his point guard’s head and the two walked up to the locker room.

It was a moment Brownell needed to share with his senior, especially after Young missed two of three free throws with 10.7 seconds to play that could have tied the game.

“It hurts because you know how much he has put into it and how much he really wants to win,” Brownell said. “He wants to be in those situations.”

With the loss, the Tigers fell to 11-12 overall and 3-6 in the ACC. Maryland, thanks to 27 points from sophomore guard Terrell Stoglin, improved to 14-9 and 4-5 in conference play. Clemson will next play at Wake Forest on Saturday for a 4:00 PM tipoff.

The Tigers have now lost nine games this season by five points or less.

“Déjà vu is about what comes to mind,” Brownell said. “Certainly, it is a very disheartening loss and it hurts a little more because it was at home. We did not make shots. At the end of the day, you have to be able to score the basketball.”

“Winning is hard to do. It is something we have to figure out,” Young said. “We are going to try and finish the rest of the season strong.”

Clemson finished the game strong after falling behind by 14 points three different times in the second half. But thanks to a couple of Young three-pointers from the top of the key and then eight straight points from Milton Jennings, who returned to the floor Tuesday after serving a two-game suspension, the Tigers found themselves down only two points with 2:12 to play.

“Give our guys credit, I thought we really battled back,” Brownell said. “We were just a little unlucky with Andre’s free throws, so we lost another game by two.”

The Tigers, who shot only 34.9 percent from the floor, had a couple of chances to overtake Maryland, but they could not get over the top. In the final 43 seconds, the Tigers missed four free throws.

Trailing 61-58, Young made only his third of three attempts to pull Clemson within two points.

“I felt comfortable,” Young said. “I thought I was going to make all three. The first one went in and out, and the second one hit the inner part of the rim. It felt good, but it just did not go down.”

Despite the misses, Young played a big role in giving the Tigers a chance to win in the first place. At one point in the second half he made four straight shots from long range and scored 13 of his team-high 15 points in the last 20 minutes.

But, Young would trade all 15 of those points for those two free throws at the end.

“He isn’t going to do well for 24 hours, but we have to make sure that it doesn’t linger.”

In addition to Young’s productivity, Tiger post players Booker and Jennings scored 14 apiece. Booker had 12 rebounds as well, giving him a second straight double-double, while Jennings grabbed six boards and was 3-for-4 from behind the arc.

Though there were some positives to take out of the Maryland loss, Brownell says his challenge is to make sure his team does not give up on the season after losing another close game.

“The message to the guys is, `We are not giving up on you, so you cannot give up on the season. You just can’t. You are playing well enough and competitive enough that this could turn our way. The worm can turn and we can win three in a row and get some things going.

“That’s the nature of sports. Right now, we are catching the bad end of it. It is a test of our character to see how we handle it and how we respond.”