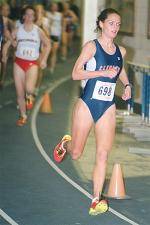 Lashonda Cutchin and Erika van Reenen were the top scorers for the Lady Tigers at the Clemson Invitational, held Friday at Littlejohn Coliseum. Nineteen women’s teams competed in the meet. The University of South Carolina finished first in the team standings, with Clemson placing fourth.

“For us to finish as a team in fourth place is very respectable, considering the competition and the fact that in several events we had no athletes,” said Coach White. White pointed out that even though the meet was held on a Friday during classes, no Clemson athletes missed any of their classes. “Some students missed their event in favor of class. That was a decision we felt we had to make, even though it hurt us pointwise,” White said.

“I am very pleased with some of the times turned in on Friday, considering the layout of our track. Plans are in the works for a new indoor track facility that will bring our student-athletes the kind of performance times they deserve, for all their hard work,” White said.