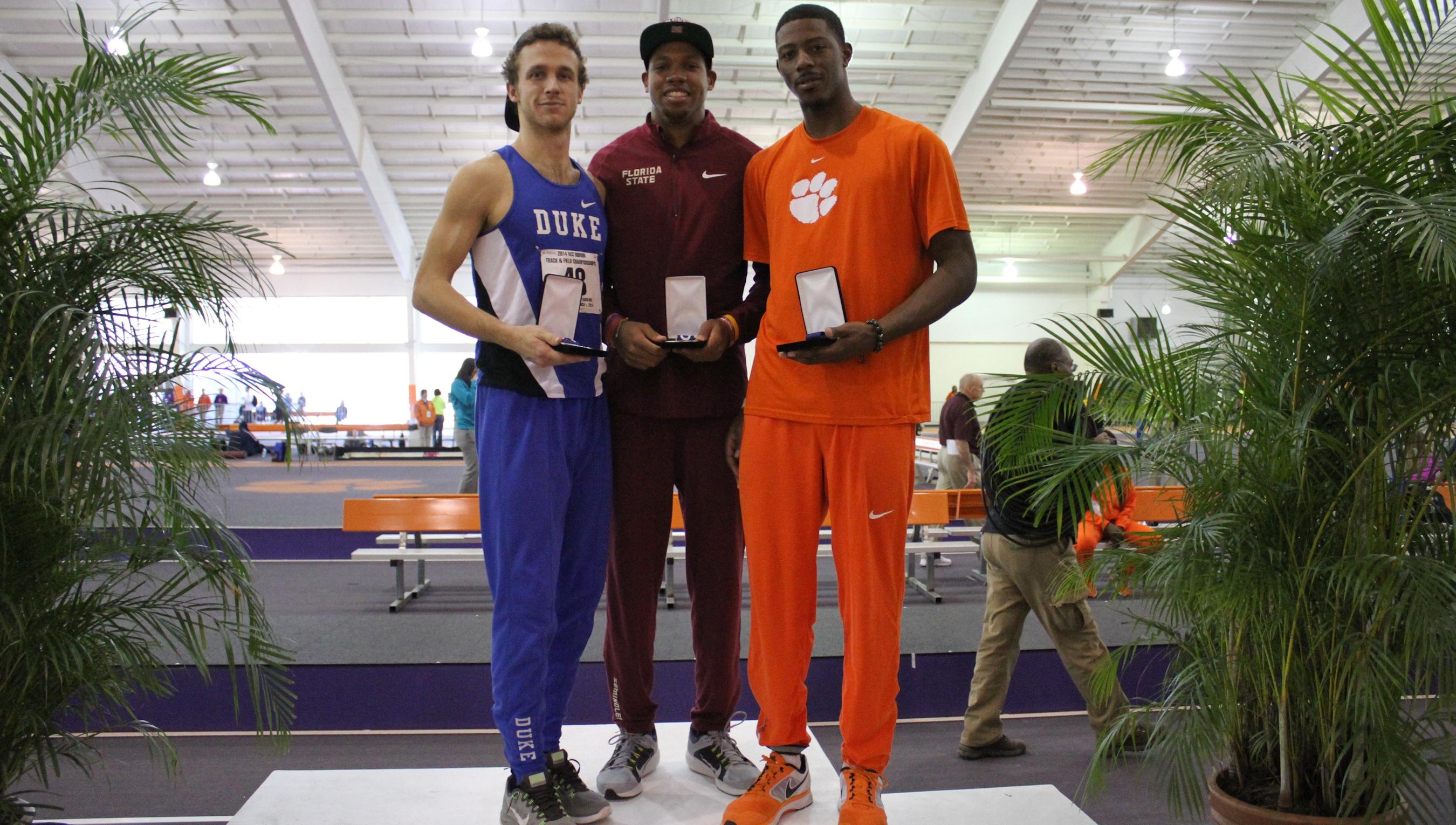 CLEMSON, SC – Clemson high jumpers Mimi Land and Torian Ware produced bronze medal performances Friday to highlight day two of the ACC Indoor Championships at Clemson’s Indoor Track Complex. The two athletes are responsible for all of Clemson’s points through two days, Land 11 on the women’s side and Ware six for the Tiger men’s team.

Duke leads the men’s standings with 44 points, followed closely by North Carolina and Florida State with 40. In the women’s team race, Florida State is ahead with 41 points, while Duke is second with 37.

Clemson Head Coach Mark Elliott:“An athlete like Mimi Land stepped up for us, and she still has more to go. We call her a gamer. On the day that it does matter, she did it in both the high jump and the long jump. It was good to see Tevin (Hester) and Reggie (Lewis) move ahead in the 60, and Reggie in the 200. And on the women’s side, Whitney Fountain qualified in both. We’re set up pretty good there for tomorrow. Unfortunately, we can’t really explain what happened with Jameel (Abdul-Mateen) and the check-in. There are rules to follow, and he broke one. We still have an opportunity to be respectable tomorrow.”

The teams return to action Saturday to round out the championships. The first events are the men’s and women’s pole vault, and women’s shot put at 11 a.m. The first track final is the women’s 60 hurdles at noon.

Field Event Finals• Torian Ware earned his second career All-ACC honor Friday. The junior from Crawfordville, GA tied a season-best by clearing 7’1.75″ on his first attempt.• Mimi Land earned her second career All-ACC accolade in the high jump, and was fourth in the long jump.• Land cleared a personal best 6’0″ in the high jump on her first attempt, extending her No. 2 mark in Clemson history by half an inch.• She followed a few hours later with a season-best 20’2.25″ in the prelims of the long jump.

Track Prelims• Justin Johnson won his section of the men’s 60 hurdles with a personal best 7.81, the second-best time in the preliminary round Friday.• Iana Amsterdam, a freshman, posted a personal best 8.56 in the women’s 60 hurdles to qualify for Saturday’s final.• Reggie Lewis qualified for the finals of both the 60 and 200, with a season-best in the latter at 21.52. He also had the second-best 60 time at 6.68.• Tevin Hester qualified for the 60 final at 6.69 and was one spot shy of advancing in the 200 as well.• Whitney Fountain qualified for Saturday’s finals in both short sprints, the 60 and 200. The Tiger senior posted a 60 prelim time of 7.55, before running an impressive heat-winning personal best 24.33 in the 200 dash.• Brianna Blanton qualified in the final slot for the women’s 800 final. The Summerville, SC native posted a personal best 2:09.48, fourth-best in school history.