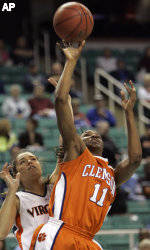 GREENSBORO, N.C. – One week meant all the difference in the world for ninth-seeded Clemson.

“We played a lot harder and with a lot more intensity,” said Clemson coach Cristy McKinney, who scored a win over her alma mater and guided the Tigers to their first ACC Tournament win since 2003. “We learned a lot from that last game. We learned what they were good at, and we did a better job of taking some of those things away.”

“We didn’t reach a lot of the goals we set for ourselves this season, and we’ve obviously struggled at times,” McKinney said. “But we have a chance to do something in this tournament. We said, ‘That goal is still there. Let’s see what we can do.'”

Lloyd finished with 12 points and 10 rebounds, and four other Tigers scored in double figures. Whitney Hood also scored 12 points, while Campbell and Lele Hardy added 11 apiece and Moreemi Davis had 10.

NC State (18-12) got a game-high 19 points and 16 rebounds from All-ACC forward Khajida Whittington. But the Wolfpack struggled through a 32 percent shooting afternoon and hurt itself with 22 turnovers.

“This is a very disappointing loss for us, for sure, but my congratulations to Clemson,” Wolfpack coach Kay Yow said. “They outplayed us in a number of ways, even though many of the stats are similar.”

Regulation ended with the score knotted at 53-all. Clemson’s Lloyd missed a five-foot runner in the lane just before time expired that would have given the Tigers the win.

Clemson led by as many as 11 points in the first half and was up 41-32 with under 17 minutes to play. But the Wolfpack battled back to grab a short-lived one-point lead, and the final six minutes of regulation and first three minutes of overtime saw four ties and three lead changes.

Campbell entered the game shooting 58 percent from the foul line, but was at her best once Clemson grabbed the lead in overtime. Her 6-for-6 effort from the line in the last 1:15 left her a 7-of-8 for the game.

“I haven’t shot free throws all that well lately, but I just told myself, ‘You’re a shooter,’ ” Campbell said. “My teammates helped me with that. They just kept telling me they knew I was going to make them.”

In a complete about-face from last week’s lopsided win at Clemson, the Wolfpack staggered out of the gate on Thursday.

NC State’s first 11 possessions produced just one basket and six turnovers as the Tigers jumped out to a 10-2 lead. Even after fighting back to within a point, the Wolfpack hit another wall that allowed Clemson to push the margin to 11 points. Whitney Hood basket at the 5:39 mark gave the Tigers a 25-14 lead.

Five points by Whittington and a 3-pointer by Shayla Fields helped the Wolfpack cut the deficit to 31-28, but her team’s 14 turnovers glared at Yow as she studied the halftime stat sheet.

“I felt like this our play this evening was really sub-par,” Yow said.

“But a lot of that can be attributed to Clemson and the tone they set for the game.”

Clemson and North Carolina met once during the regular season, with the Tar Heels posting a 79-47 win on Feb. 7. Still, McKinney said her team welcomes Friday’s challenge.

“We’re a young team, but we’ve won two games in a row, and we’ve won them in pretty good fashion,” McKinney said. “North Carolina is a great team, but we have to believe we can compete, and we have to play with confidence.”