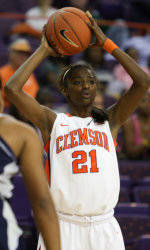 CLEMSON, SC – The Clemson women’s basketball team downed St. Augustine’s College, 74-57, in an exhibition contest on Friday night in Littlejohn Coliseum. It was the Lady Tigers’ last tune-up until opening the regular season next Friday against Davidson at 5:30 pm.

The Tigers went on a 14-0 run early in the second half to pull away from the Falcons, forcing 20 turnovers and forcing just 24 percent shooting. The Tigers, by contrast hit 47.8 percent of their shots, and four of 12 three-point attempts.

Clemson spread out the scoring, with Nikki Dixon and Chancie Dunn each leading the way with 14 points, Shaniqua Pauldo had 12 points, and Kelly Gramlich had nine points, hitting three three-pointers.

Lindsey Mason had eight points and eight rebounds, and Quinyotta Pettaway had eight rebounds as well. Dixon had nine assists and five steals to lead the Tigers, while Dunn also had seven assists.