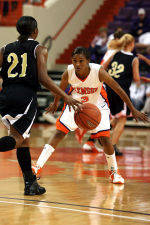 CLEMSON, SC – The Clemson women’s basketball team defeated Anderson College by a score of 75-60 in an exhibition game on Tuesday night at Littlejohn Coliseum. Eleven Lady Tigers saw action in the team’s only exhibition game of the 2005-06 season, and three players scored in double figures for first-year Head Coach Cristy McKinney.

Anderson’s LaShonda Chiles was the story of the first half as she scored 18 of her 24 total points in the period. Chiles hit seven of 12 shots, including three of four from the three-point line, to help the Lady Trojans to a 33-27 lead at the half.

However, Clemson came out of the break tough, opening the half with seven straight points to take a 34-33 advantage. The Lady Tigers scored 24 of the period’s first 32 points and went on to outscore their opponent, 48-27, in the second half. Lloyd scored 11 of her 14 points in the final period and Julie Talley responded with nine points after being held scoreless in the first half.

Clemson will begin the 2005-06 regular season at the WBCA/BTI Classic in Tempe, AZ on Nov. 11-12. The Lady Tigers will face Missouri on Friday and either host Arizona State or Vanderbilt on Saturday. The team’s home opener will be on Nov. 18 against Tennessee Tech at 5:00 PM.