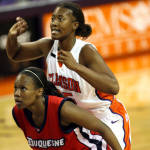 Hood, a native of Meridian, MS, totaled 14 points and 11 rebounds to set personal bests for her young Clemson career. Meanwhile, Hardy set a career high with 10 assists to go along with her 13 points and eight rebounds.

The Lady Tigers (2-1) trailed 42-35 at the break but opened the second half on an 8-1 run, tying the score just 2:20 into the period. With a narrow 52-51 lead, they then scored six unanswered points to take control of the game.

“This was an important win for us at home,” Clemson Head Coach Cristy McKinney said. “In the second half, we switched to a zone defense and drove to the basket more to create opportunities. Lele really stepped up for the team tonight to run the point.”

Hardy was forced to play out of position after starting point guard Christy Brown suffered an injury two minutes into the second period. Brown totaled 15 points, which ended up leading the Lady Tigers, before leaving the game.

Duquesne’s Kristi Little led all scorers with 21 points, while Jade Singleton pulled down 10 rebounds to lead the Dukes, who fell to 1-1 on the year.

April Parker also scored in double-figures for Clemson with 13 and 10 points on the night. Overall, the team shot 43.3-percent from the field and out-rebounded Duquesne by a 45-35 margin.

The Lady Tigers extended their lead to nine points (64-55) on a fast break lay-up by Sthefany Thomas at the 6:30 mark. After a jumper by the Dukes’ Samantha Pollino, Campbell drained a pair of free throws to put the Clemson advantage back at nine. The Lady Tigers then continued to convert their free throws down the stretch, finishing 18-for-21 from the line.

Clemson scored the first seven points of the game, but the Dukes quickly caught fire for a 17-6 run that put them ahead for the remainder of the first half. A three-pointer by Brown at the 3:50 mark cut the deficit to 35-31, but Duquesne posted the next seven points and took a 42-35 lead into the lockerroom.

The Lady Tigers will face their first road test this weekend, as they travel to Chattanooga for a Saturday night date against the Lady Mocs.