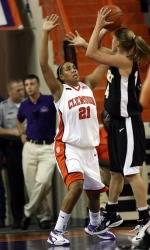 BOULDER, CO – April Parker hit three free throws in the final 15 seconds, including two with just 3.6 remaining, to secure a 62-59 Lady Tiger victory over Rice on Friday evening at the Coors Events Center in the 21st annual Coors Classic. Clemson will vie for the tournament title against the winner of host Colorado and Siena on Saturday at 7:30 pm (Mountain Time).

The Lady Tigers (3-3) saw a 13-point second half advantage dwindle to just three with 39.5 seconds left, but Parker knocked down the foul shots and ended the game with a career-high 16 points. The sophomore transfer was just one rebound shy of a double-double and also contributed an assist, a block and a steal in the contest.

Senior D’Lesha Lloyd turned in one of the top performances of her career with 18 points and a personal-best 16 rebounds. Twelve of her points came in the final period, including seven during a 13-6 Clemson run to open the second half.

“It was a good win and a big team win for us tonight,” said Lady Tiger Head Coach April Parker really stepped up and Kirstyn Wright came off the bench to have a good game. D’Lesha (Lloyd) was huge for us tonight. She didn’t shoot the ball well, but she just played with such energy. Anytime a player ends up with 16 boards, she is being very active.”

The win was also a milestone for McKinney as she defeated a team she guided for the 12 seasons prior to taking the job at Clemson.

“This was also bittersweet for me,” she said. “Four of Rice’s five starters played for me for one year there, and I hope they win the rest of their games.”

Valeriya Berezhynksa led the Owls (5-2) with 21 points as she drained 13-of-15 from the foul line. The 6-4 senior also pulled down a team-best 15 rebounds in the effort. Kadie Riverin also scored in double figures for Rice with 15.

Lloyd collected 10 of her rebounds in the first half, including six on the offensive end to help the Lady Tigers to a 28-22 lead at the break.

Clemson then opened the second period with back-to-back lay-ups for a 32-22 lead. After Rice posted the next six points, the Lady Tigers went on a 9-0 run to open up a 13-point lead with 15:32 remaining.

With Clemson ahead by 12 (55-43) after a pair of free throws by Morganne Campbell at the 8:04 mark, Rice went on a run of its own. The Lady Owls scored the next seven points to narrow the gap to five and held the Lady Tigers to just two field goals for the rest of the game. A three-pointer by Maudess Fulton cut the lead to 59-56, but Parker knocked down her foul shots to give Clemson the win.