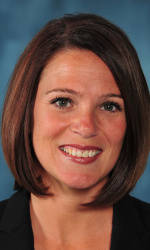 “First of all, she is seasoned,” said Coleman. “She’s been a head coach at the college level. She’s a tireless worker, and she can recruit. Jayme’s personality will fit right in with our staff.”

“I am so excited to get to Clemson,” said Callahan. “The program is headed in a great direction, and I want to help get it to that next level. Coach Coleman has so much energy and passion, and it is fun to jump in and be a part of it. It’s a tremendous opportunity to come to the ACC and work with this staff.”

“I’ve been aware of the tradition at Clemson” continued Callahan. “When I researched the program further, Coach Coleman and [Senior Women’s Administrator] Barbara Kennedy-Dixon are legends because of all they have accomplished at Clemson. That’s one reason why I’m so excited; the program is in such great hands to take the next step.”

Callahan brings an extensive list of experiences with her to Tigertown. While in Philadelphia, she coordinated the recruitment of six new student-athletes with head coach Jeff Williams, including two top-100 players at their position and four McDonald’s All-America nominees.

“I’m excited. I can’t wait for her to get in orange and get on the road,” said Coleman.

Callahan spent two seasons at Southeast Missouri with the Redhawks, from 2008-10, and was also a head coach at Division III Webster University for two seasons.

Callahan’s other coaching stops have included one year as an assistant coach at the University of Missouri-St. Louis (2005-06) and three seasons as a head coach at two prep programs. In her only season at Putnam County High, she was named Tri Rivers Conference and District Coach of the Year (2002-03), and she was at Trinity Catholic High School for two years (2003-05).

Callahan earned a degree in health promotion and wellness in 2002 from Missouri Southern State (Joplin, MO), where she started at point guard for all four of her college seasons. She completed her career atop the Lions’ all-time career steals list with 225 and games started with 107, starting every game since her freshman season. She also ranks second on the school’s career assist chart with 429.

“She’ll be working with guards and have recruiting responsibilities,” said Coleman. “She’ll get out in the community, and will help Coach Yo in organizing the recruiting effort, and will fit right in.”

“I was a point guard, and a bunch of us coaches at Clemson were,” said Callahan. “Leadership and work ethic are huge for me. If you work hard and portray a great attitude and are coachable, we are able to improve. As a guard, you have to be a leader and a floor general, and this is something I can pass along from my playing days. I am able to bring energy, and the passion of teaching the game of basketball and look forward to challenging the unit.”