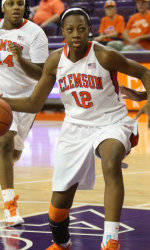 Lady Tigers Upset No. 21/No. 23 North Carolina in Chapel Hill

CHAPEL HILL, NC – The Clemson women’s basketball team ended a 53-game losing streak against ranked foes with a 52-47 triumph against No. 21/23 North Carolina in Chapel Hill on Thursday. Clemson (5-10, 1-3 ACC) held the Tar Heels (12-4, 2-2 ACC) nearly 31 points below their season scoring average and out-shot out-rebounded North Carolina for their first win in Chapel Hill since Jan. 10, 2000, one year after head coach Itoro Coleman graduated from Clemson.

It was Coleman’s signature victory in her young coaching career, as her imprint was demonstrated by the fact that Clemson started and played three freshmen more than 35 minutes on Thursday. The win snapped a 17-game skid overall to the Tar Heels, and a five game streak this season.

It was a team effort, but Quinyotta Pettaway sparkled with 16 points and 12 rebounds, both tying career highs in front of many friends and family. Fellow North Carolina native Chelsea Lindsay hit 6-6 from the line and 4-4 in the last two minutes. She totaled eight points, five rebounds, and five assists and played all but 30 seconds in the game. Freshman Kelly Gramlich also had 11 points, including a huge three to put Clemson up three with less that four minutes left.

Lindsay and Pettaway combined for Clemson’s final six points, as Pettaway hit a turn-around jumper with 1:20 remaining to help put it away

Clemson charged out to an 8-0 lead in the first 3:14, and took a 10-2 lead with eight points off seven UNC turnovers. Clemson held UNC without a field goal for the first 4:50 of clock.

The Tar Heels responded with an 13-0 run over the next four minutes as Clemson missed seven straight shots after starting 5-8. Clemson bounced back with a pull-up jumper from Lindsay and a layup from Pettaway to pull within one at 17-16 at the 8:37 mark. The Tar Heels extended the lead to six at 24-18 prompting a Coleman timeout at 6:01, which ended up a turning point in the half.

The Tigers responded with a baseline jumper from Gramlich and a hook shot as the shot clock expired by Pettaway to pull within 24-22. The Lady Tigers then tied it up at 26 on a basket from Mason, and went into halftime tied, 29-29. Clemson did not allow a North Carolina basket for the final 6:01 of the half, as the Heels made their living from the line, going 8-14, while Clemson was just 3-4.

Pettaway had 10 points and seven boards in the half as Clemson grabbed 14 of 19 defensive rebounding opportunities, and outrebounded the Heels by a 21-14 count.

Clemson opened the second half with six straight, including four from Pettaway to force a Carolina timeout just 1:36 into the half. Clemson’s defense stayed tight, as Ruffin-Pratt’s field goal with 16:16 remaining ended a 9:46 slump without a hoop for Carolina. Overall, The Tar Heels were 2-16 in the second half in the first eleven minutes. Clemson led by as many as seven at 40-33.

The Tar Heels stormed back to take a 41-40 lead, before Gramlich hit a 17-footer from the baseline to put Clemson back ahead. Ruffin-Pratt tipped in a Shegog miss to take the lead back before Clemson went inside to Mason, who drew a foul, hitting one to tie it at 43-43 with 7:10 to play.

The teams traded stops for several possessions before Gramlich hit a huge three with 4:46 to play to give Clemson a three-point edge. Carolina got a hoop on the other end from Gross to cut it to one, Lindsay hit a pair of free throws with 1:55 to play in a one-and-one situation, and Pettaway hit the jumper with 1:20 to play to give the Tigers a 50-45 lead.

North Carolina hit a basket, and got a stop from Clemson and had the ball with a chance to tie with 11.1 seconds, but turned the ball over out of bounds, and Lindsay calmly sank both free throws with 3.2 seconds remaining to set the final margin.

Clemson is off from competition until next Thursday as they return home to take on NC State.