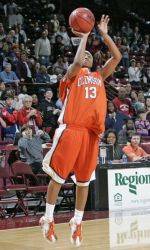 Clemson’s bid to upset #20 Maryland in women’s basketball action fell just short, as the Terrapins held on for an 87-82 win over the Lady Tigers at Littlejohn Coliseum. The win improved Maryland to 16-5 overall, 5-4 in the ACC. The loss was the eighth straight for Clemson, dropping the Lady Tigers to 7-14 overall.

Facing a 10-point deficit at halftime, the Lady Tigers came out and put 50 points on the board in the second half. With the game tied at 72, the Terps went on a 9-0 run which essentially put the game out of reach for Clemson.

Despite the loss, there were some fine individual efforts on the part of several Clemson players. Freshman D’Lesha Lloyd had 18 points and hit 4-6 from three-point range. Reggie Maddox, who went scoreless in the North Carolina game on Friday as well as the first half Sunday, scored 17 second-half points. She also pulled down six rebounds, dished out four assists, recorded two blocks, and had five steals.

For Maryland, an incredible first-half shooting performance by Ashleigh Newman proved to be the different in the game. She hit 7-9 three-pointers and had 21 points, half of Maryland’s first-half total. She did not score in the second half. Crystal Langhorne contributed a double-double with 12 points and 13 rebounds. Kalika France had 19 points and six assists.

Clemson played a steady first half, but trailed by 10 at the break thanks to Newman’s effort. The Lady Tigers actually had more assists than turnovers in the half. Talley hit three outside shots in the opening half, giving her 92 for her career at Clemson. With Maryland leading just 26-24, the Terps put together a 13-2 run near the end of the half to pull away at the break.

In the second half, Clemson shot 52.6 percent from the floor. The Lady Tigers shot 6-11 from three-point range and finished the game 10-21. The 47.1 percent shooting for the game was one of Clemson’s best efforts this season. The Lady Tigers also committed a season-low 14 turnovers, one game after posting 35 in the loss to North Carolina.

Next up for Clemson is a road trip to Tallahassee, FL and a Wednesday night game with Florida State. The Lady Tigers will look to avenge a 68-57 loss to the Seminoles earlier this season. Tip-off is scheduled for 7:00 PM from the Donald Tucker Center.