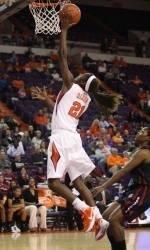 Game Setup:Site: Timmons ArenaDate: Monday, November 28, 2011City: Greenville, SCTime: 7:00 PMRadio: WCCP-FM 104.9; WCCPFM.com(Don Munson – play-by-play,Kanetra Queen – color)CLEMSON, SC – The Clemson women’s basketball returns to action on Monday night in Greenville, SC as they take on the Furman Paladins (3-1) at 7:00 pm. It will be Clemson’s (2-2) first game in a week, as the team took the Thanksgiving holiday off, returning to practice on Friday. Live stats will be available courtesy of FurmanPaladins.com, and fans can listen to the game via WCCP-FM or at WCCPFM.com. The Lady Tigers hold a 21-3 all-time mark against Furman, and a 10-2 ledger in Greenville, SC. Both Furman’s Jackie Carson and Clemson’s Itoro Coleman are in their second season at their alma mater, and the two met four times on the floor as players and once as coaches, with Clemson taking the meeting last season. It was actually Coleman’s first game on the floor as a head coach, as she made her debut just 18 days after the birth of her third child.Clemson is coming off a loss in their first road test of the season at North Carolina A&T. The Lady Tigers’ youth has been a running theme, as 81 percent of the minutes have gone to freshmen and sophomores, and 78 percent of the points have come from those classes. Nikki Dixon leads Clemson offensively, as the freshman from Alpharetta, GA is fourth in the ACC at 16.3 points per game, and is coming off 19 points on 8-11 shooting against the Aggies. Quinyotta Pettaway has been solid for the Lady Tigers so far as well, grabbing eight or more rebounds in three of the four games, and tallying double-figures offensively in three games. She leads Clemson and ranks 11th in the ACC at 7.0 rebounds per game and 25th in scoring at 10.8 points per game. Seniors Shaniqua Pauldo and Lindsey Mason have held down spots in the paint, with Pauldo recording double figures twice this season, and averaging 10.3 points per game. Mason ranks third in the ACC at 2.5 blocks per contest, and has eight in the previous two games. Chancie Dunn and Chelsea Lindsay have been reliable with primary ball-handing duties, with each ranking among the top five in the ACC in assists per game. Kelly Gramlich, a freshman from Texas, earned her first career start last week, and played nearly all 40 minutes, scoring ten points against the Aggies. After playing at Furman, Clemson returns home to play Illinois in the Big Ten/ACC challenge on Dec. 1 in Littlejohn Coliseum.