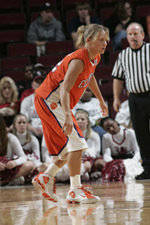 Lady Tigers Travel To Washington, D.C. To Take On Georgetown

CLEMSON, SC – The Lady Tigers basketball team, winner of four straight games, will travel to Washington, D.C. to face the Georgetown Hoyas on Dec. 30 at 8:00 PM. Clemson has won six of its last seven games for a 6-6 overall record for the 2005-06 season, while the Hoyas defeated Florida Atlantic last night to improve to 6-4 this year. Friday night’s game will be broadcast over the Internet on Yahoo! radio as well as on a tape delay on 104.9 WCCP-FM. Dan Scott will provide the play-by-play with Kanetra Queen serving as color commentator.

Three-point shooting and shot blocking continue to be the strengths of the Lady Tigers this season. Senior Julie Talley has made 38 three-point field goals and is shooting 48.1% from behind the line. As a team, Clemson has converted 34% of its shots from long-range. The Lady Tigers are listed second in the ACC with a 7.25 block per game average with Khaili Sanders leading the way. The recent graduate has rejected 27 shots this season to rank third in the conference. Amanda Frist and Tasha Taylor are also listed individually for the statistical category. Taylor continues to lead the ACC with a 6.5 assist per game average after she dished out a career-high 13 on Dec. 23 against Savannah State. Clemson’s sophomore point guard has totaled 78 so far this year.

The Series Clemson and Georgetown have met on only one previous occasion on the basketball court. The Lady Tigers defeated the Hoyas, 71-62, on Jan. 2, 2005 at Littlejohn Coliseum. Clemson used a strong second half to post the victory as the team scored 48 points in the final period to erase a four-point halftime deficit.

Scouting the Hoyas The Georgetown Hoyas won a 71-62 decision over Florida Atlantic on Wednesday, Dec. 28 to better their record to 6-4 for the 2005-06 season. Kieraah Marlow had been Georgetown’s leading scorer, averaging 14.3 points in the Hoyas first six games, but she has been sidelined in their last three contests. Prior to Wednesday’s contest, Kate Carlin had an 11.9 scoring average, while Bethany LeSueur was averaging 11.2 points per game.

Katrina Wheeler leads Head Coach Terri Williams’ squad on the boards with an 8.1 rebound per game ratio, as of Dec. 27, while Kristen Heidloff has handed out 49 assists for a 5.44 assists per game average.