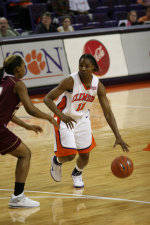 Lady Tigers to Play Host to Wake Forest on Thursday

CLEMSON, SC – The Lady Tigers (11-14, 3-7 ACC) will play host to Wake Forest (9-15, 0-10 ACC) in women’s basketball action on Thursday night. The two teams are slated for a 7:00 pm tip-off from Littlejohn Coliseum. Fans not in attendance will be have three different avenues to catch the action, as the game will be aired over the radio, broadcast on the Internet and available on livestats. Dan Scott will call the play-by-play with www.clemsontigers.com.

Tasha Taylor posted 17 points in Clemson’s victory over the Deacs earlier this season and has averaged 13.5 points per game since that contest. The native of Columbus, GA is currently ranked 10th in school history with 320 career assists. Rookie Lele Hardy also etched her name in the Lady Tiger record books with 82 steals for the current season, which ranks fourth all-time and is just five shy of the freshman record. Hardy owns a 10.9 scoring average while tying D’Lesha Lloyd with a team-high 6.9 rebounds per game average. Lloyd leads all scorers with a 14.5 average that also ranks 11th in the ACC.

Clemson vs. Wake Forest, The Series The Lady Tigers defeated Wake Forest by a 73-57 margin earlier this season in Winston-Salem, NC to improve their overall record against the Demon Deacons to 42-12. Clemson also holds a 22-5 advantage in games played on its home court, including a 75-68 victory last season at Littlejohn Coliseum. The series dates back to the 1977-78 season.

Scouting the Demon Deacons Wake Forest will bring a 9-15 overall record into Littlejohn Coliseum on Thursday night. The Demon Deacons are winless in the conference with an 0-10 mark, most recently falling to #1 Duke, 77-45, on Feb. 11.

However, Yolanda Lavender ranks second in the ACC with a 17.2 scoring average thanks in large part to 56 three-point fields goals on the year. Corinne Groves is then ranked third in the league with a 9.5 rebounds per game average. She also averages in double figures for the Deacs with 10.8 points per game.

Overall, Wake Forest is averaging 57.8 points per game with a 39.3 rebounds per game figure. The Deacs have drained 111 three-point field goals on the year and have recorded 28 more blocked shots their opponents.