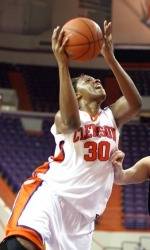 Lady Tigers To Play Host To Miami On Thursday

CLEMSON, SC – The Clemson women’s basketball team (7-9, 0-1 ACC) will play host to Miami (7-9, 0-1 ACC) on Thursday night in the Lady Tigers’ home ACC opener. The teams are scheduled to begin play at 7:00 pm from Littlejohn Coliseum.

The game will be broadcast on CSS with Matt Stewart and Robin Mueller calling the action. Fans can also follow the game on the airwaves with Dan Scott and Kanetra Queen on WCCP-FM (104.9), while livestats will be available by accessing www.clemsontigers.com.

D’Lesha Lloyd leads the Clemson squad with an 8.8 scoring average, while sophomore Lele Hardy is pulling down a team-best 6.3 rebounds per game. Junior center Moreemi Davis turned in one of the best performances of her career last year at Miami. She recorded the first double-double of her career with 11 points and a then-personal-best 10 rebounds in helping the Lady Tigers to a win over the Hurricanes.

Scouting The Hurricanes: Miami enters Thursday’s contest with a 7-9 record, most recently falling in their conference opener to Duke, 84-72, on Jan. 5. The game will be just the Hurricanes’ second true road game this season. Miami defeated Milwaukee in overtime in late November.

Maurita Reid leads the Hurricane offense with a 16.0 scoring averge. The senior from Queens, NY has hit 46 three-point field goals this year with a .365 shooting percentage from behind the arc. Reid is also the team’s leading rebounder with 5.8 per game and has tallied 65 steals already in 2007-08.

Overall, Miami is averaging 63.8 points per game while shooting 38.9-percent from the field.

Clemson vs. Miami, The Series Thursday’s game featuring Clemson and Miami will be just the sixth meeting between the two schools in a series that dates back to 1981. The Lady Tigers took a 3-2 lead in the series score after defeating the Hurricanes by a 79-69 margin in Coral Gables, FL last season. However, Miami’s two wins have both come at Littlejohn Colisuem.