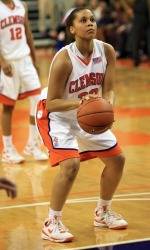 Lady Tigers To Play Host To Charlotte On Friday Night

CLEMSON, SC – The Lady Tiger basketball team will play host to Charlotte on Friday night in its final game before starting the conference season. Clemson (9-3) and the 49ers (8-4) are slated to tip off at 7:00 pm at Littlejohn Coliseum. Broadcast Notes  The game will be broadcast on the Clemson Tiger Sports Network  Don Munson will call the play-by-play with Kanetra Queen providing color commentary  The game will also be video streamed on www.ACCSelect.com  Livestats will be available on www.clemsontigers.com Clemson Quick Notes  Friday’s game will be the 13th meeting between Clemson and Charlotte in history and the third straight year the two teams have met  The game will be the Lady Tigers’ final one before starting the conference season on Monday, Jan. 5 at Miami  Lele Hardy ranks second in the ACC in scoring and rebounding with averages of 19.1 points and 8.9 rebounds per game  Tasha Taylor graduated on Dec. 18 with a degree in sport management  The Lady Tigers won five straight games from late November to mid-December after trailing at halftime, a program first  With a 8-2 record though the first 10 games of the season, Clemson had its best start since the 2003-04 season and its best record through 10 games under Head Coach Cristy McKinney  Clemson is now 2-1 in overtime games under Cristy McKinney and 19-15 all-time.  Clemson won the Husky Classic over the Thanksgiving weekend, defeating Kent State and host-Washington Lele Hardy was named the MVP of the Husky Classic while Whitney Hood was selected to the all-tournament team  The Lady Tigers committed just seven turnovers against Winthrop on Nov. 25, which was the second fewest all-time  Lele Hardy 32 points against Georgia State on Nov. 22 were the most for a Lady Tiger in five years.  Taylor and Christy Brown both rank in the top six for career assists per game  Lele Hardy 208 career steals are seventh in school history  Hardy holds the school record with a 3.01 career steals per game average  Clemson has nine players from the state of Georgia on its roster, which is tops in the nation for a school in a different state, according to a survey by the SID at George Mason  Sthefany Thomas spent her offseason traveling with the Argentinean national team to the South America Championships and the FIBA Olympic Qualifier  The 2008-09 Clemson women’s basketball roster has quite the athletic lineage. Six players have parents and/or siblings that also played a sport at the Division I level  McKinney and her staff signed North Carolina point guard Keyrra Gillespie on Nov. 12. Gillespie will join the Lady Tiger program in 2009-10. Series Notes  Clemson leads the all-time series with Charlotte by a 9-3 score.  However, the 49ers have won the last two meetings, including a 62-58 decision on their home court last season.  Charlotte also won the most recent match-up in Littlejohn Coliseum, defeating the Lady Tigers, 65-62, during the 2006-07 season.  Friday’s game will mark the third straight year the two teams have met and the eighth game played on Clemson’s home court.  The Lady Tigers’ last win over the 49ers was by a 78-71 margin in the first round of the 2004 WNIT in Clemson, SC.