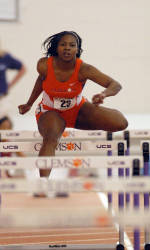 Clemson, SC – The women’s track & field team will play host to the Solid Orange Classic this weekend at the Rock Norman outdoor facility. The two-day meet will begin Friday with the women’s hammer throw at 5:00 PM, then conclude Saturday with the major portion of events.

Each of those five student-athletes will be in action this weekend. Kokayko will lead a group of three (including indoor All-American Della Clark) in the hammer on Friday, while Hardy, Barringer, and Buchholz will be three of the seven Lady Tigers in the 100m hurdles Saturday. The prelims for that event are at 11:15 AM, with the final slated for 1:45 PM.

Clemson will field a total of three student-athletes in the 100m dash, including women’s basketball standout Christy Brown. A native of Atlanta, GA, Brown was an ACC All-Freshman selection in women’s hoops this season. She won Georgia state high school titles in the 100m and 200m as a junior in 2004. The 100m is set for 11:45 AM (trials) and 2:15 PM (final).

Beth Jordan and Caroline Kennedy will lead a group of four in the pole vault competition Saturday morning at 10:00. The duo ranks in a tie for fifth in school history with an outdoor pole vault clearance of 11’11.75″. Other field events held Saturday will include the high jump, long jump, triple jump, shot put, discus, and javelin.