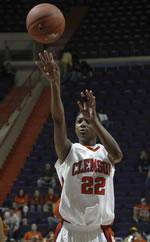 CLEMSON, SC-The Clemson Lady Tiger basketball team will play NC State in the quarterfinal round of the 27th Annual Atlantic Coast Conference Women’s Basketball Tournament at the Greensboro Coliseum in Greensboro, NC Saturday evening at 6:00 p.m. A television broadcast and livestats of the game will be available at www.clemsontigers.com.

NC State is led in scoring by Kaayla Chones with a 14.9 ppg. average. She also leads the Wolfpack in rebounding with an 8.1 rpg. mark.

In 1997, Clemson defeated NC State 87-75. That year, Clemson was the sixth seed in the tournament and NC State was the third seed, just like this season.

Senior guard Lakeia Stokes was named First Team All-ACC as announced by the Associated Press. The Covington, GA native finished third in the voting. Stokes is the only player in the ACC to be ranked in the top 10 in the following statistical categories: scoring, rebounding, assists, blocked shots and steals.