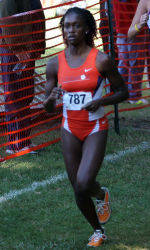 The Clemson women’s cross country team will travel to Earlysville, VA this weekend to take part in the ACC Championships, hosted by the University of Virginia. The 6K event will take place at Panorama Farms, which is located just miles from Virginia’s campus. The women’s race is scheduled for 10:00 AM Saturday.

The course, which features several hills and sharp turns, was the site of the Lou Onesty Invitational earlier this season. Clemson competed in that 5K event and was sixth in the team standings. Laura Laughlin, a sophomore newcomer on the team, was 19th in her only trip to Panorama Farms. She has been consistent for the team this season, scoring in all five meets for Clemson. Laughlin’s best 5K time of 18:57.2 came at the Lou Onesty Invitational.

Patrice McMillan, Thea Dix, and Sunday Ford will be making return trips to the ACC Championships. Last season, McMillan and Ford scored in the event for the Lady Tigers. McMillan, who is coming off a career-best finish of 10th place at the Furman Invitational two weeks ago, has scored in the four meets she has competed this season. She was the team’s second-leading scorer at ACCs last season. Ford has scored in all four events she has competed and owns a season-best time of 19:05.

Lisa Brown will also make the trip this weekend for Clemson. She is coming off consecutive scoring contributions for the first time in her career. She placed 40th at the Furman Invitational with a career-best 5K time.

Three freshmen will be making their inaugural appearances at the ACC Cross Country Championships this weekend. Two of the three student-athletes have scored this season at various events. Maggie Bernard has scored twice, including at the Lou Onesty event earlier this year. Bernard was 59th at that meet. Lauren Klas has contributed to the team score on three occasions, including most recently at Gardner-Webb on October 6. Klas owns a personal best 5K time of 19:55, which she accomplished at the season-opening Gamecock Invitational. Ashley Vaughn has come close to scoring at a number of meets, including last time out at Furman. She placed 49th at that event.