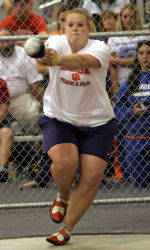 Lady Tigers Third After Day One at Clemson Invitational

The Lady Tiger track & field team stands third after day one at the Clemson Invitational, thanks in large part to the standout performance of senior thrower Della Clark. She posted an NCAA provisional qualifying mark and established a personal best in the weight throw with a mark of 66’1.75″. Only former NCAA All-American Jamine Moton has posted a better mark in the weight throw at Clemson.

Ra’Sheena Parker, a pair of newcomers to Lady Tiger track & field this season, qualified for Saturday’s finals in the 60m dash. Scott posted a 7.66 in the third prelim, which was the top time that heat. Parker had a 7.67 and was ninth-fastest overall Friday. Polly Hardy ran a 7.89 in that event for Clemson.

Hardy posted the fourth-best time in the 60m hurdles with an 8.63, which qualified her for Saturday’s final. Krystal Barringer had an 8.79 and was seventh overall. Linda Buchholz, a mid-year enrollee, was first overall in the fifth prelim. She had a time of 9.02, which just missed qualifying her for Saturday’s consolation final.

The distance medley relay team of Thea Dix, and Patrice McMillan finished fourth with a time of 12:13.37. Alabama’s A squad won that event in 12:01.92.

In the long jump, Nakeisha Wineglass was Clemson’s top finisher in eighth place. She had a season-best leap of 18’3.75″. Patricia Mamona, a mid-year enrollee, was 10th overall with a mark of 18’1.75″.

The Lady Tigers will conclude the meet on Saturday, with the first event getting underway at 11:00 AM.