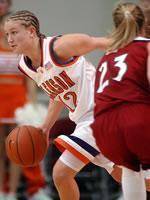 The Clemson women’s basketball team will look to improve on its 1-4 record this weekend with games versus South Carolina and Morehead State. The Lady Tigers and Gamecocks meet in Columbia at the Colonial Center on Friday night at 7:00 PM. Clemson then plays host to Morehead State on Sunday at 2:00 PM.

The Lady Tigers have lost four consecutive games after winning the season opener against Western Carolina at home. Clemson is outrebounding opponents by over six per game, but is shooting just 34.7 percent as a team and is averaging over 20 turnovers per game.

Leading Clemson in scoring is Reggie Maddox, who has reached double figures in four out of five games. She averages 9.4 points per game, and also has contributed to Clemson’s rebounding total with 5.4 rebounds per game. Lauren Allen has been the Lady Tigers’ best rebounder this season, averaging 7.2 per game. She has 20 offensive rebounds through five games.

Clemson will take on a 1-3 South Carolina team on Friday in Columbia. The Gamecocks were defeated 78-72 on Tuesday by an undefeated Charlotte team. Leading scorer Lauren Simms had 29 points in that game and leads the team with an 18.0 points per game average. No other Gamecocks is averaging double figures in scoring.

Much like Clemson, the Gamecocks have done a good job on the boards this season. South Carolina has a +5.3 rebounding margin over opponents. The Gamecocks are shooting 40.3 percent from the field.

Morehead State comes to Clemson on Sunday with an 0-4 overall record. The Lady Eagles will play their fourth straight road game on Sunday when they take on Clemson in Littlejohn Coliseum. In their most recent action, the Lady Eagles lost to Marshall, 81-61. Freshmen Stacey Strayer and Vanessa Jackson had 11 points in the game to lead Morehead State. The Lady Eagles have had four different top scorers through their first four games this season.