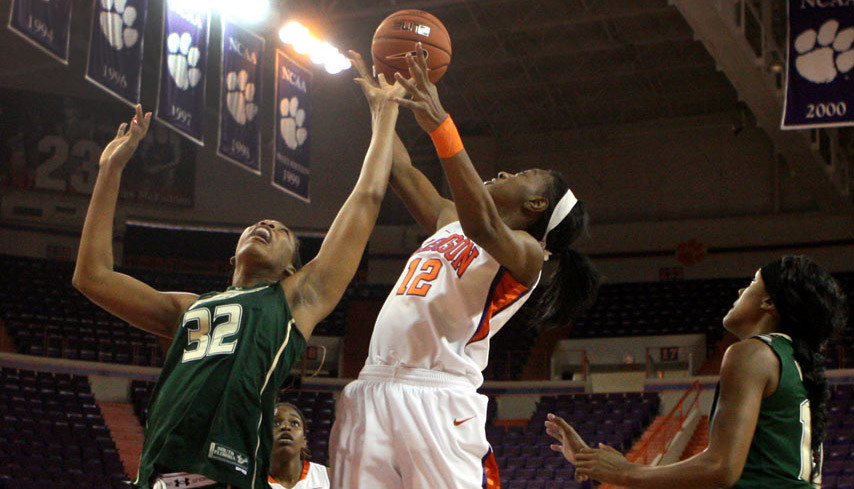 MYRTLE BEACH, SC – The Clemson women’s basketball team shook off a slow start to surge past Providence (2-8), on Wednesday night at the Myrtle Beach Convention Center. The Lady Tigers (3-7) set a school record that stood for more than 27 years for shooting accuracy in a half, hitting 15-20 (.750) from the field in the second half.

“I saw perseverance,” said Itoro Coleman, whose team has won three of their last four games. “We came together and played hard. We did whatever we needed to do to get the W. Everyone that played contributed. This was a great team win.”

Nikki Dixon led Clemson with 18 points on 7-15 from the field. She’s now scored 64 points in her last three games, and 43 of those have been in the second half.

Aisha Turner played a terrific game at the point with 12 points (5-9 FG, 2-2 FT), six rebounds, and six assists in 38 minutes. She was the catalyst behind Clemson’s 18 fast break points and 30 points in the paint. Quinyotta Pettaway gave the Tigers a third player in double-figures with 13 points, and a team-best seven rebounds.

Clemson committed a season-high 28 turnovers, but forced 27, and the Tigers were simply more efficient with their opportunities. They converted 15 of their 20 attempts in the second half to set a new school standard. The previous mark was a 28-38 (.737) first half against Presbyterian in 1985.

The first half was a tale of two halves in itself. Providence led, 17-5, with 11:50 to play. Their aggressive 1-3-1 was stunting dribble penetration and forcing jumpers. However, an Aisha Turner hoop finally stopped the bleeding, and Dixon scored a pair in transition.

Clemson scored six straight points early in the second half to take a 38-26 lead with 14:33 to play. The Friars trimmed it to as few as seven with 13:53 left, but were not able to get closer the rest of the way. When Nyilah Jamison-Myers hit her only bucket of the game with 9:56 to play to give Clemson an 11-point advantage, Clemson didn’t relinquish a double-figure lead the rest of the game.

The Lady Tigers will play Samford on Saturday at 1:00 pm in Littlejohn in the final game before breaking for the holidays.