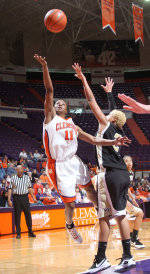 CLEMSON, SC – The Clemson women’s basketball team suffered a 71-66 loss to Wake Forest on Sunday afternoon at Littlejohn Coliseum as the Lady Tigers were unable to overcome a career game from Demon Deacon forward Corinne Groves. Groves scored a personal best 32 points and fueled a 14-0 run early in the second half that erased Clemson’s halftime lead.

The Lady Tigers are now 13-12 on the year with a 2-8 record in conference play while Wake Forest posted its fourth straight win to move to 17-5 overall with a 4-4 mark against ACC opponents.

Groves was 13-of-20 from the field with five rebounds while Courteney Morris also added 13 for the Deacs on Sunday afternoon.

Lele Hardy led Clemson with 20 points, eight rebounds and five steals in the effort. The junior from Spartanburg, SC, who was presented with a commemorative basketball ball during the pregame ceremonies for reaching the 1,000-point mark for her career last month, moved into 17th place all-time in the school record books with 1,054 total points.

Following the Wake Forest run, the Lady Tigers went back on top at 48-46 as Sthefany Thomas knocked down a three-pointer and Whitney Hood scored on a put-back. However, it was the last lead Clemson would hold. Morris drained back-to-back three-pointers and the Demon Deacons turned an 11-point deficit into a 61-51 advantage in just over 10 minutes of play.

“We played well in the first half, and for the first couple of minutes in the second,” said Lady Tiger Head Coach Cristy McKinney. “Then it was like we thought we had it and just quit playing. We have to find a way to be consistent.”

Lele Hardy converted on a three-point play with 3:39 remaining to put Clemson within three at 63-60. Groves then hit a pair of jumpers around a basket by Hood and Wake Forest capitalized on a costly Lady Tiger turnover to go back up by seven. Thomas hit four straight free throws in the final 53 seconds to narrow it back to just a three-point Deac lead, but the shots didn’t fall for Clemson and Wake Forest held on for the victory.

Thomas and Hood both finished in double figures for the Lady Tigers with 13 and 12, respectively.

Clemson used a 12-2 run in the final 4:51 of the first half to take a nine-point advantage into the half. The Demon Deacons led early in the contest at 10-4 before the Lady Tigers began to hit from the field. The score then remained tight until Wake Forest held the one-point edge at 26-25. Clemson scored three unanswered baskets and then Hardy and Thomas drained back-to-back threes for the 37-29 lead.

The Lady Tigers will be back in action on Friday night as they travel to Durham, NC for a televised game against the Duke Blue Devils.