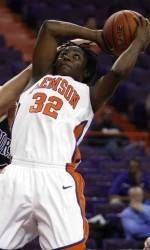 CLEMSON, SC – The Clemson Lady Tiger Basketball team will look to extend its best start since 2003-04 when they take on the Indiana Hoosiers (3-3) at 7:00 p.m. in Littlejohn Coliseum. Clemson (5-1) is on a two-game winning streak in the Challenge.

The game will be faculty and staff appreciation night, and all Clemson faculty and their families will receive free admission to the game.

The game will also be available with live video on TigerCast at ClemsonTigers.com.

Clemson and Indiana have only met once all-time, a 77-58 Tiger victory in 1979. Clemson has defeated Northwestern in each of the last two seasons in the Challenge, where the ACC is 3-0.

Clemson Quick Notes: * Head Coach Itoro Coleman returned to the sidelines on Nov. 23 against Furman after missing the first four games Coleman is in her first season as a head coach. * The 2000 graduate of Clemson was most recently at Penn State Clemson is 2-1 All-Time in the ACC/Big Ten Challenge, with wins coming each of the last two seasons. * Clemson’s 5-1 start is their best since the 2003-04 campaign. * The Lady Tigers rank third in the nation in 3FG% at 45.1% (41-91). * Defensively, Clemson has held five opponents to 57 or fewer points this season, a feat they accomplished only four times all of last season. * The Tigers also rank 3rd nationally in blocks per game with a 7.0 average, behind future opponents Baylor (8.0) and North Carolina (7.7). * Senior Sthefany Thomas leads the team in scoring at 16.2 ppg, and has scored in double-figures in ten straight games, dating to last season. * Freshman Kelia Shelton pulled down 13 boards against SC State, setting a career-high, after finishing just a rebound shy of her first career-double-double in the previous game. The freshman has started the last 3 games. * Kirstyn Wright are each averaging 13.0 ppg so far this season, giving Clemson three double-figure scorers in the early going.