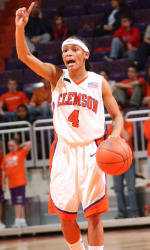 D’Lesha Lloyd is coming off of a 31-point performance at Virginia Tech on Thursday night that set a personal best and was the most points scored by an ACC player this season. The senior from Columbia, SC is now averaging 10.8 points per game to lead the Clemson squad. With 39 points in the last two games, point guard Christy Brown brought her season average to 9.3 points per game and ranks first on the team with 77 assists.

Sunday’s game will be broadcast on CSS with Pete Yanity calling the play-by-play and Robin Mueller serving as an analyst. Fans can also follow the action on the airwaves with Don Munson and Kanetra Queen on the Clemson Tiger Sports Network, and livestats will also be available on www.clemsontigers.com.

Scouting The Seminoles Florida State will bring a 12-6 overall record to Littlejohn Coliseum on Sunday afternoon. The Seminoles own a 2-1 record in conference action, suffering their only ACC loss to #12/13 Duke in Durham.

The Seminoles will regain the services of Tanae Davis-Cain and Angel Gray for Sunday’s contest as the pair has served its nine-game suspension. Davis-Cain was leading the team with a 13.7 scoring average in its first nine games of the season. Mara Freshour and Jacinta Monroe are also averaging in double figures. Freshour has hit 35 three-point field goals this season at a nearly 40-percent success rate. Meanwhile, Monroe boasts a .621 field goal percentage for the year and is also leading the team in rebounding and blocks.

Overall, Florida State is averaging 71.3 points per game while holding the opposition to just 62.4 per game. The Seminoles are shooting 44.4-percent from the field.

Clemson vs. Florida State, The Series This afternoon’s match-up between Clemson and Florida State will be the 35th meeting between the two schools. The Lady Tigers lead the series by a 23-11 margin that included 21 straight wins from 1992-2002. However, the Seminoles have been the victor in the past 10 games and defeated Clemson twice last season. They won by a 73-61 margin in Tallahassee and edged the Lady Tigers, 61-60, at Littlejohn Coliseum.