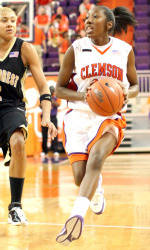 CLEMSON, SC – Lady Tiger rookie Kirstyn Wright drained four shots from beyond the arc to lead the Clemson women’s basketball team to a 66-46 win over Wake Forest at Littlejohn Coliseum on Sunday afternoon.

Campbell finished with 11 points and had five rebounds on the day.

The Clemson advantage grew to as many as 27 in the second period, the widest margin for the team this season, while the Lady Tigers’ 20-point victory was tops on the year.

“We played great tonight offensively,” said Clemson Head Coach Kirstyn Wright, who stepped up for us tonight behind the arc.”

The three-pointers accounted for all 12 of Wright’s team-leading points, her second straight game as the Lady Tigers’ high scorer. The native of Stone Mountain, GA had 16 at Georgia Tech on Thursday night.

Defensively, Clemson held the Demon Deacons (13-11, 0-9 ACC) to just 34.8-percent shooting from the field and converted 24 points off of Wake Forest turnovers.

“Our full-court pressure allowed for many steals and easy buckets,” McKinney added.

Lele Hardy, who is inching closer to the Lady Tiger career top-10 list for steals, had three of Clemson’s 10 on the afternoon. She now has 154 in just her sophomore season.

The native of Spartanburg, SC finished just one point shy of a double-double with 10 boards and nine points.

The Lady Tigers led, 43-22, at the break after Christy Brown hit a jumper as the clock expired.

The offensive effort hit a lull in the second half as the teams combined for just 17 field goals and 47 points, but Clemson maintained the edge, increasing its lead to 27 at the 12:56 mark after a D’Lesha Lloyd basket in the paint.

Although Lloyd had five points in just 14 minutes of action, she moved into 20th place in the Lady Tiger annuals with 990 career points.

Alex Tchangoue, who played the entire 40 minutes for Wake Forest, led the Deacs with 17 points and eight rebounds.

The Lady Tigers will travel to Chapel Hill, NC on Thursday to take on the third-ranked Tar Heels. Game time is scheduled for 7:00 pm from the Carmichael Auditorium.