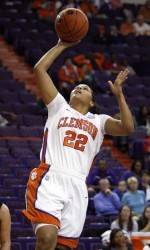 CLEMSON, SC – Already off to their best start since 2003-04, Itoro Coleman’s Lady Tigers will try to move to 5-1 on the young season on Sunday at 2:00 PM in Littlejohn Coliseum. Clemson and South Carolina State (1-2) renew an in-state rivalry in a series that hasn’t been played since 1994.

All Lady Tiger Basketball Camp participants will receive free admission and their parents may purchase a ticket for $3.00.

Clemson has relied on hot shooting a solid defense in the early going. The Lady Tigers lead the ACC in three-point shooting at 45.2%. The Tigers also rank second in the conference in blocked shots at 7.0 per contest.

The Tigers are coming off back-to-back wins against Kennesaw State and Furman, and went 2-1 in their stretch of three games in six days. The Tigers will play next in the ACC/Big Ten Challenge on Thursday night at 7:00 pm against Indiana.