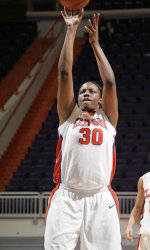 The Clemson women’s basketball team will play host to ACC newcomer Miami on Monday at 7:00 PM from Littlejohn Coliseum. The game will be televised live by Comcast Sports Southeast and will also be broadcast on the radio by Clemson Tiger Sports Properties.

The Lady Tigers are 7-11 overall, but have lost five consecutive games after opening the ACC season with a 78-65 win over N.C. State. Clemson is 5-4 at home this season, but just 2-7 on the road. The last home game for Clemson was January 20 against Virginia Tech, where the Hokies were victorious 81-66 over the Lady Tigers.

Clemson does not have a double-figure scorer on average, but Reggie Maddox is at 9.9 points per game as the team leader in that category. She also is first in assists and steals per game. The leading rebounder on the Clemson team is junior center Amanda White at 6.1 per game.

D’Lesha Lloyd continues to pace the Lady Tiger offense in ACC games, as she is averaging 11.3 points per game through six conference contests. Fellow small forward Carrie Whitehurst played her best game of the 2004-05 season in Clemson’s most recent game at Georgia Tech. The 6-0 Whitehurst had nine points on 3-6 three-point shooting and a career-high six rebounds.

Freshman Moreemi Davis tied a career-high with eight points in the loss at Georgia Tech last Wednesday. The 6-3 Davis has given Clemson some quality minutes as of late, and she is averaging 4.5 points per game in the ACC.

The Hurricanes enter Monday’s contest with a 9-10 overall record and are fresh off a 62-57 upset over 19th-ranked in-state rival Florida State. The win over the Seminoles was the first conference victory of the season (1-5) for the Hurricanes.