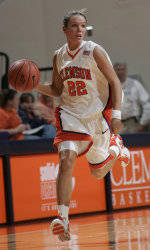 Clemson’s women’s basketball team returns to action on Sunday, January 2 to play host to Georgetown at Littlejohn Coliseum. The Hoyas are the third and final Big East foe to face the Lady Tigers this season. The game is scheduled to tip-off at 2:00 PM.

The Lady Tigers enter Sunday’s contest with a 5-6 overall record. After starting the year 1-4, Clemson reeled off four straight victories. However, the Lady Tigers fell at Rutgers and at Ole Miss last week to fall one game below .500 for the season. Clemson will look to even its record at 6-6 before entering conference play, which begins with a home game against N.C. State on January 9.

Clemson’s leading scorer and top performer so far this season has been junior college transfer Reggie Maddox. The 5-9 guard is averaging 11.0 points per game, and also leads the team in assists (43) and steals (20). She also has the second-highest rebounding average on the team at 5.8 per game.

Tasha Phillips has been an effective newcomer for Clemson as well. She is second on the team at 8.3 points per game, but had 15 in her last outing against Ole Miss. She leads the team in three-point attempts and is second in three-pointers made. She poured in a season-best 22 in a win over South Carolina earlier this season.

Clemson has outrebounded eight of its 11 opponents and holds a +4.0 rebound margin. The leading rebounders for Clemson this season have been Amanda White (6.5 per game) and Maddox (5.8).

Georgetown will enter Sunday’s game with a 5-5 overall record. The Hoyas split a pair of games at the La Salle Classic held in Philadelphia, PA earlier this week. Georgetown fell to the host school 79-67 before pulling out a 65-59 victory over Kent State to even its record.

Kieraah Marlow, the Hoyas’ leading scorer, led the Georgetown squad with a pair of double-doubles in the La Salle Classic. She had 19 points and 11 rebounds against the Explorers, then 19 points and 10 rebounds in the win over Kent State. Mary Lisicky had 12 assists for the Hoyas in the two mid-week games.