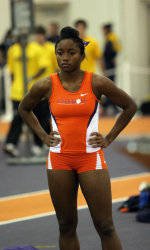 In the 100m dash, three Lady Tigers qualified for the finals. Christy Brown, competing in her first collegiate event, posted a solid time of 12.00 in the final. She is the starting point guard for the Lady Tiger basketball team. In the final, Ra’Sheena Parker scratched after a prelim time of 11.95.

The 4x100m relay team of Polly Hardy, Parker, Brown, and Scott posted a time of 45.89 and won the event in an easy fashion. The group, running together for the first time this season, came up .04 shy of the team’s best time of the season.

Hardy continued her fine season in the high hurdles, claiming first place with a regional-qualifying time of 13.80. She is already third in school history in the event. Liane Weber was second at 14.30, her personal best. The Lady Tigers actually claimed the top six spots in the event. Sierra Hill was runner-up in the 400m hurdles with a time of 1:01.39.

Anni Korhonen finished second to lead a trio of Lady Tigers with 5’5″ clearances in the high jump. Katie Farnan was listed third, while Weber was determined as the fourth-place finisher.

In the long jump, Patricia Mamona took home the title after a jump of 19’2″ in the finals. It was her best mark of the outdoor season, and top jump by any Lady Tiger so far this spring. Linda Buchholz was runner-up at 18’7″, while Ashley Good finished third at 18’3.75″.

Nakeisha Wineglass won the triple jump title and recorded her first-ever regional-qualifying mark. She hit a mark of 40’6″ and ranks second on the team behind Mamona in that event.

Beth Jordan claimed the pole vault title with a clearance of 11’5.75″. She achieved the height in fewer attempts than teammate Caroline Kennedy, who eventually cleared 11’5.75″ as well.

Della Clark, a senior from Acworth, GA, posted her best effort of the young outdoor season in the hammer throw. The second-ranked hammer thrower in school history, she recorded a regional-qualifying mark of 179’7″ in the finals Friday afternoon to propel her to victory. She held off teammate Rochelle Kokayko, who had a mark of 176’10”. Catheryne Porter finished fourth at 143’11”.

Porter won the discus throw on Saturday. The Charleston, SC native had a personal best effort of 145’2″, finishing well ahead of her competition. Her previous best was 144’7″ at the Yellow Jacket Invitational earlier this season.

Buchholz claimed the javelin throw title with a regional-qualifying mark of 142’7″. She achieved the mark with her final attempt of the morning. She held off teammate Bethanie Wachna, who was runner-up at 138’1″.

The Lady Tigers return to action April 19-21 for the ACC Outdoor Championships, which will be held in College Park, MD.