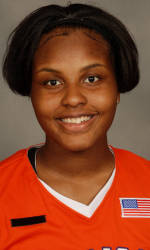 CORAL GABLES, FL – Shaniqua Pauldo scored 13 of her team-high 15 points in the second half to lead the Lady Tiger basketball team to victory on Monday night at the BankUnited Center. Clemson erased a 13-point Miami lead in the final nine minutes of the game to post the 74-68 win, its 10th of the year, and open the conference season with a victory.

The Hurricanes held a 41-38 advantage at the break and then opened the second half on a 14-4 run. The Lady Tigers went without a basket for the first five minutes of the period before Pauldo converted a basket in the paint to end the Clemson drought.

The rookie from Macon, GA finished 7-for-9 from the field with seven rebounds and three blocked shots, all career highs, in just 14 minutes of play.

“I just tried to play more relaxed,” said Pauldo. “We needed some points and I had a size advantage inside.”

After Miami extended its lead to 55-42 on a free throw by Charmaine Clark at the 9:38 mark, the Lady Tigers finally found success on both ends of the court. Bryelle Smith knocked down a three-pointer for the corner to start the rally as Clemson scored the next seven points en route to a 22-2 run in a six-minute stretch. Sthefany Thomas drained a pair of threes during the run and finished with 14 points as the Lady Tiger bench scored 45 of the team’s points in the win.

“When we needed to play some defense, we did,” said Clemson Head Coach Cristy McKinney. “Then we started hitting some shots. We went to a man defense and finally got some stops, which then led to some runouts and easy baskets for us.”

“The players then did a good job of recognizing what was available,” she added.

Miami cut the lead to five points several times in the final minutes of the game and came within three at 68-65 with 1:50 remaining. Diane Barnes hit a jumper and then LaToya Cunningham made a lay-up after Shenise Johnson forced a Lady Tiger turnover.

Tasha Taylor responded with a basket in the paint and Clemson held off the Hurricanes for the rest of the way.

Lele Hardy also scored in double figures with 13 points and grabbed a career high 15 rebounds for her fifth double-double of the year. The junior forward hit a trio of three-pointers as the Lady Tigers knocked down a season-high nine from long range. Clemson also recorded 21 assists on 31 baskets, led by Hardy’s six, for a generous afternoon on the floor. Six players tallied at least one assist in the game and nine different players found the scoring column.

Riquana Williams posted 23 points to lead Miami for the second straight game. The freshman guard was single-handedly responsible for a 10-0 Hurricane run in the first half turned a seven-point Clemson lead into a 31-28 advantage for Miami. The Hurricane run following 10 straight points for the Lady Tigers.

Johnson also scored in double figures for Miami with 16 points and added seven rebounds, four assists and four steals in the effort.

Clemson will return to Littlejohn Coliseum on Thursday night as the Lady Tigers will play host to second-ranked North Carolina. Game time is scheduled for 7:00 pm.