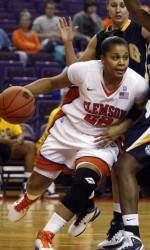 CLEMSON, SC – The Clemson Lady Tiger Basketball team defeated the Kennesaw State Owls (2-3), 68-57, using a strong defensive effort to move to 3-1 on the season. Sthefany Thomas nailed a career-high five three pointers on her way to a game-high 18 points to lead Clemson.

“Even when we won our first two games, we taught,” said acting head coach, Karleen Thompson. “We’ll enjoy this win, but we will still be working on the things we need to work on. We’ll just continue to fine-tune those things and get them to continue to learn the new system.”

The Tigers held Kennesaw State to 18.4% shooting (7-38) in the first half and used an early 17-0 run to take a 33-16 lead into halftime. Kennesaw State never got closer than nine for the rest of the game as the Tigers won the fourth all-time meeting between the schools.

Clemson will return to action on Tuesday when they play host to Furman at 7:00 pm. Head coach Itoro Coleman, who has missed her first four games, will return for the game.

Thomas had 15 of her 18 in the second half, as she went 5-8 from the field in the half, including four of the threes. Bryelle Smith played a solid game at the point for the Tigers, tallying eight points, a career-high eight assists, and six rebounds in the contest.

Clemson continued its strong three-point shooting, hitting 11-20 attempts, improving their league-leading percentage to .484 (30-62). Shaniqua Pauldo had 12 points, seven rebounds, three blocks and made 2-2 from behind the arc, both coming in the first three minutes of play. She had ten in the first half.

Another bright spot for the Tigers was freshman Jasmine Tate had seven points and 11 rebounds, giving her double-digit rebounds in each of her last three games.

After Kennesaw scored the first two points of the game off a Clemson turnover, the Tigers went on a blistering, 17-0 run to open up a big lead. All five starters scored in the run, led by Pauldo’s two three-pointers. Pauldo is 5-7 from distance so far this season.

Clemson was able to stretch the lead to 20 at 29-9 on a Bryelle Smith three-pointer.

Kennesaw cut into the lead early in the second half, closing the gap to nine at 35-26, but the Tigers were able to push it back out to 14 after a layup from Pauldo. The Owls didn’t get any closer than ten the rest of the game on a three-pointer with less than 15 seconds remaining by Ashley Holliday.