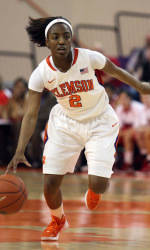 Game Setup:Clemson Lady Tigers (5-13, 1-6 ACC) v. #24/nr Georgia Tech Yellow Jackets (15-6, 5-3 ACC)Date: Sunday, January 29, 2012Time: 4:00 PMCity: Clemson, SCSite: Littlejohn ColiseumRadio: Clemson Tigers Sports Network; WCCPFM.com(Don Munson – play-by-play, Kanetra Queen – color)Webcast: Tigercast (Clemsontigers.com)Livestats: GametrackerPromotions: Girl Scouts will receive free admission when they wear their uniform. A pregame shootaround and message from the Coaches will be available, as well as postgame autographs and basketball facilities tourCLEMSON, SC – The women’s basketball team will play their second game against a ranked opponent in three days when they take on No 24/nr (AP/Coaches) Georgia Tech (15-6, 5-3 ACC) on Sunday at 4:00pm in Littlejohn Coliseum. Clemson (5-13, 1-6 ACC) will host a promotion for Girl Scouts, who will receive free admission when they wear their uniforms to the game. Clemsontigers.com will have all of the coverage. The game will appear live on TigerCast, and broadcast on the radio courtesy of the Clemson Tiger Sports Network. Live scoring and stats are available courtesy of Gametracker.Quinyotta Pettaway leads the Lady Tigers in ACC play at 10.9 points and 7.7 rebounds per game, and is coming off a double-double against No. 5 Duke in the previous game, her third of the season. Freshman Nikki Dixon leads the Tigers at 11.9 points per game and ranks in the top-five in the conference with 2.6 steals per game, and had four against Duke, while also tallying 11 points. Chelsea Lindsay, Clemson’s leader with 613 minutes played this season, is handing out nearly four assists per game, and has a 1.15 assists:turnover ratio. After the home game, Clemson will play four of the next five on the road, including a Friday-Sunday trip to Blacksburg and Miami.