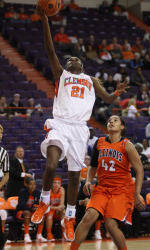 Game Notes | Watch LiveGame Setup:Site: Athletics Center O’RenaDate: Friday, December 9, 2011City: Rochester, MITime: 6:30 PMRadio: WCCP-FM; WCCPFM.com   (Roy Philpott – play-by-play, Kanetra Queen – color)Webcast: OUGrizzlies.com CLEMSON, SC – The Clemson Lady Tigers will play their final game before final exams with a 6:30 pm showdown with the Oakland Golden Grizzlies on Friday night. Oakland, a university of more than 19,000 students, is situated outside of Detroit in Rochester, MI. Clemson (3-4, 1-1 away) and Oakland (3-4, 2-2 home) have met twice in history on the hardwood, with each team taking a game. The game will be broadcast at OUGrizzlies.com and Live stats will be available at ClemsonTigers.com. Clemson will be off until a home game with N.C. Central on Dec. 18 in order to complete final exams for the fall semester. Senior Shaniqua Pauldo is coming off her fourth career double-double, and her second this season off the bench. Pauldo poured in 25 points, and grabbed 10 rebounds in the effort, upping her scoring average to 12.3 points per game this season, second-best on the team, and pulling her within 200 points of 1,000 for her career. Meanwhile, freshman Nikki Dixon continues to lead Clemson in scoring at 14.0 points per game, and average that puts her tops in the ACC and ninth nationally among all freshmen in scoring. She posted career-bests in rebounds (8) and assists (6) in the most recent game, and is averaging 14.0 points, 4.4 rebounds, 3.1 assists, and 2.1 steals per game. Freshman Chelsea Lindsay has also had a strong impact this season, leading the team and ranking fifth in the ACC amongst all players at 32.9 minutes played per game. The point guard is averaging 5.1 points, 4.1 rebounds, and 3.9 assists per game. Natiece Ford scored 11 points and grabbed seven rebounds in her most recent outing as well. On the season, 54 percent of the minutes have gone to the freshmen, and 46 percent of the team scoring and 48 percent of the rebounding has come from that class. Clemson and Oakland met last season in Littlejohn, a 74-49 Grizzly victory. Bethany Watterworth had 21 points and 10 rebounds to lead all players, while Shaniqua Pauldo (11 points) was the lone Lady Tiger in double-figures.