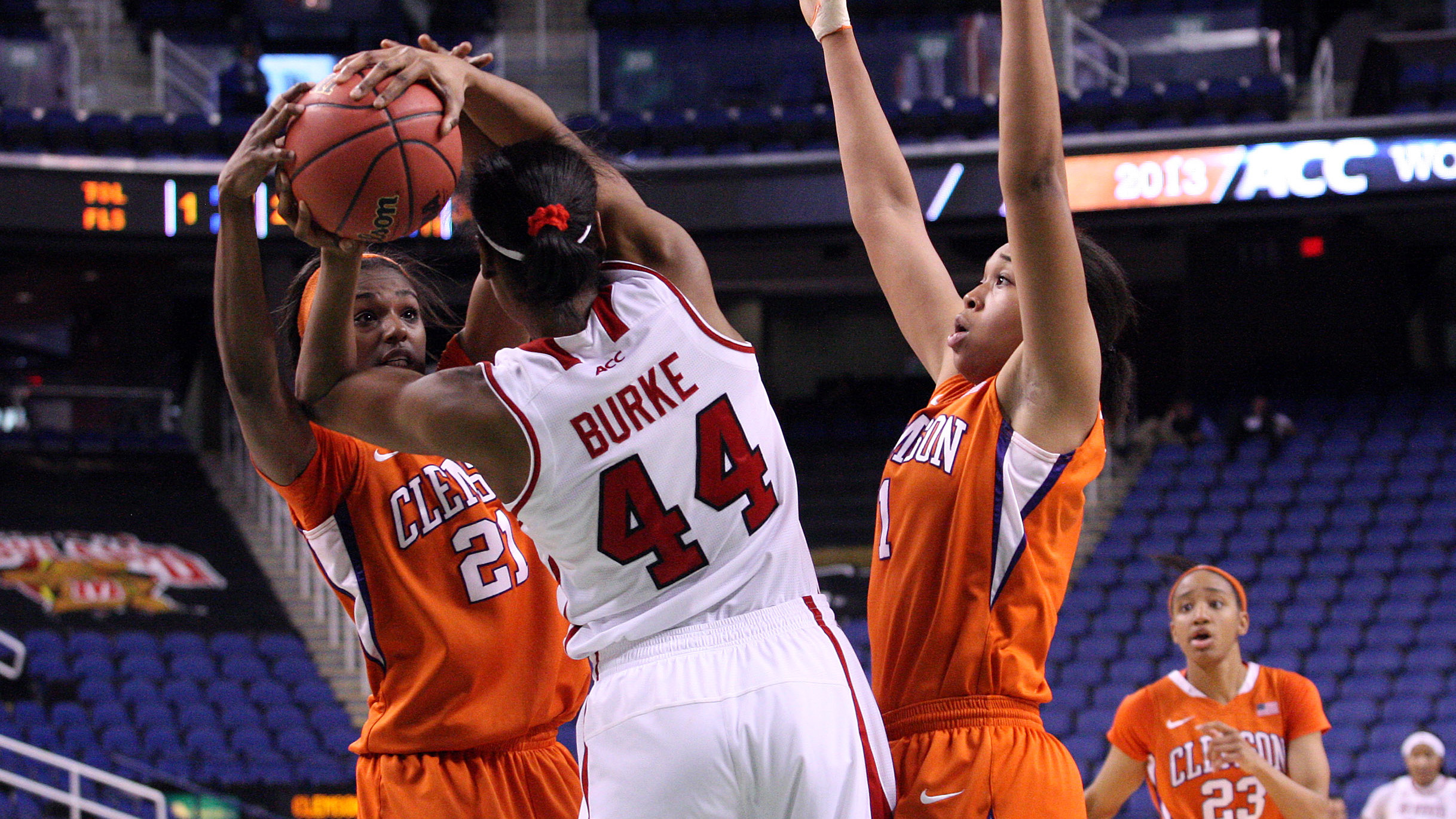 GREENSBORO, NC – Clemson was outscored 16-1 over the final 6:14 as NC State (16-15) topped the Lady Tigers, 56-45, in the first round of the 2013 ACC Women’s Basketball Tournament in Greensboro, NC. Clemson went cold from the floor in the second half in the elimination game, and finishes the season 9-21 overall.

Clemson was the nine-seed, while NC State had garnered the eight-seed. The Lady Tigers led by as many as eight in the first half, and 44-40 with 6:14 left when Chancie Dunn stole the ball near the Pack basket, and converted on an old-fashioned three-point play.

From there, Clemson went 0-8 with two turnovers in their final eleven possessions, with Quinyotta Pettaway‘s free throw at 2:35 as Clemson’s lone point. Pettaway finished the game with nine points, nine rebounds, three steals, and two blocks in 34 minutes.

Kody Burke (16 points) and Marissa Kastanek (14 pts), who combined for just 11 points on Sunday, were the driving force behind the run. Kastanek’s back-breaking three with just under three minutes to play proved to be the final push the Wolfpack needed.

Clemson fell to 0-3 against the Pack this season, and 2-5 in program history in the second game when playing the same team twice in a row.

Nikki Dixon started 5-7 from the field, but missed her final eight attempts, and did not score in the second half after tallying 11 in the first frame.

After NC State’s 16-point win on Sunday, Clemson came out with a different energy, but ran out of steam over the final few minutes.

Clemson controlled play in much of the first half, knocking in eight jumpers, and scoring 12 points in the paint, compared to just six for NC State. The Wolfpack shot 8-25 (.320) from the floor.

Dixon had the hot hand, scoring 11 points in the half, all in the first 12 minutes of the frame. Pettaway helped clean up on the boards, registering seven rebounds.

Clemson was able to build a 25-17 after a 9-0 run, which was closed by Pettaway’s put-back. NC State quickly cut the lead back to two, however, and Clemson took a 29-26 lead into the half.

In the second half, NC State took a 38-35 lead with 12:36 left. Neither team scored for four minutes, a streak put to an end by a pair of Kelly Gramlich freebies. Nyilah Jamison-Myers then scored baskets on back-to-back possessions to give Clemson a 41-38 lead with 7:02 left. After a State field goal, Dunn’s hoop and a foul gave the Lady Tigers the 44-40 lead.

Clemson led, 44-42, before Gatling made a pair of free throws to knot it up. After a defensive stop, Kastanek drilled a deep three to give the Wolfpack a 47-44 lead for good with 2:53 to play. After an empty offensive possession, Burke hit a layup, and on the next possession, hit a layup and was fouled to give State a 52-45 lead.