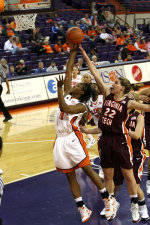 CLEMSON, SC – Clemson junior Lele Hardy scored the 1000th point of her career on Wednesday night but the Lady Tigers couldn’t pull out the win, falling to Virginia Tech, 65-61, at Littlejohn Coliseum.

Hardy finished with 13 to just reach the milestone and become the 21st player in school history to achieve the feat. The native of Spartanburg, SC also had five rebounds and three steals in the effort.

The loss culminated an 11-day stretch with five games for the Lady Tigers and dropped them to 12-10 on the year and 2-6 in ACC play. Meanwhile, the Hokies picked up their first conference win of the season to move to 10-10 overall with the 1-5 league mark.

After leading at the break, Clemson shot a mere 8-of-34 from the field in the second half to score just 22 in the period. The Lady Tigers held Virginia Tech to just 10 field goals, but the Hokies converted 13 free throw attempts, including three in the final 1:11 to seal the victory.

“We shot well in the first half, but not in the second,” said Clemson Head Coach Cristy McKinney. “We needed more drives, instead we settled for too many three’s. I thought defensively we did enough to win the game, but you have to score more when you are at home.”

Utahya Drye posted a double-double for the Hokies with 17 points and 11 rebounds, while Nikki Davis and Shanel Harrison also scored in double figures at 14 and 10, respectively.

The Lady Tigers went on a 10-2 run in the final 2:46 of the first half to take a 39-32 lead into the lockerroom. Whitney Hood knocked down two straight jumpers to put Clemson on top at 31-30. Following a lay-up by Virginia Tech’s Brittany Gordon, Hood drained a pair of foul shots and then made another basket to score eight of the 10 points during the stretch.

Kirstyn Wright added two free throws with 36 seconds remaining for the seven-point margin, which was the largest for either team in the period.

However, the Hokies scored the first seven points of the second half to erase the Lady Tiger lead. Clemson held off Virginia Tech until the 10:26 mark when Laura Haskins hit two free throws. Gordon then gave the Hokies a four-point advantage with 10:10 remaining and the teams were tied three times in the next four minutes. The Lady Tigers regained the lead on a pair of foul shots from Tasha Taylor at 2:24 to make it 61-60, but they didn’t make a shot the rest of the way.

Harrison gave the advantage back to Virginia Tech with a layup immediately following Taylor’s free throws and the Hokies converted from the foul line to post the victory.

Clemson will take on Georgia Tech on Sunday in its next action. The Lady Tigers and Yellow Jackets will play at 2:00 pm in Atlanta.