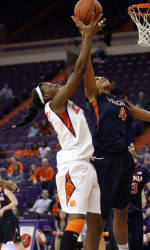 Lady Tigers Fall to No. 5 Duke

CLEMSON, SC – The Clemson Lady Tigers put out a valiant effort, but suffocating defense propelled No. 5/5 (AP/Coaches) Duke to an 81-37 win over Clemson in Littlejohn Coliseum in front of a season-high 1,696 fans. The Blue Devils (17-2, 8-0 ACC) held Clemson (5-13. 1-6 ACC) to just 13 points in the second half, using a 15-2 run late in the first half to secure distance from the Lady Tigers, who trailed 25-22 with 5:29 to play in the frame. Quinyotta Pettaway had 12 points and a game-high 10 rebounds for her third double-double of the season, while Nikki Dixon tallied 11 points and four steals for Clemson. Senior center Lindsey Mason chipped in with 8 points, 5 rebounds, and 3 blocks in the game. Clemson turned away eight shots as a team, two above their season average, which ranked 11th in the nation entering the game. Natiece Ford had a career-high three blocks, while Pettaway and Shaniqua Pauldo each added a rejection. Tricia Liston score 16 points to lead all players for the Blue Devils, and freshman Elizabeth Williams had 14 points, five rebounds and five blocks, and was a consistent presence in the lane throughout the evening. The Lady Tigers opened up strong out of the gates, taking a 9-4 advantage 3:49 into the game with some effective offense. The Devils came back to take the lead at 10-9 on a Williams layup before Clemson reclaimed it on a long two-pointer from Chancie Dunn. After a Duke three, Clemson tied it up with a basket from Mason on a feed from Pauldo. Duke stretched the lead to seven at 25-18 before Dunn had Clemson back in it with a layup and a dish to Mason to pull within three at 25-22 with 5:29 to play. But Duke clamped down defensively, allowing just one hoop the rest of the half, a layup by Mason with 3:25 to play. In all, they closed the half on a 15-2 run, taking a 40-24 lead into halftime. With Clemson trailing 48-32 with 16:54 to play, the Devils again went on a damaging 17-2 run, with Mason’s elbow jumper as the only hoops during the run with 13:09 to play. When the dust settled, Duke held a 65-34 lead with 12:29 to play. Clemson could not muster a basket the rest of the way, going 0-14 in the final 13-plus minutes, and going without a point of any kind after Dixon’s layup with 8:37 to play. Clemson shot .370 in the first half, but just .167 (4-24) in the second, but did shoot a season-high .889 from the free throw line. The Lady Tigers have little chance to recover with a Sunday meeting with Georgia Tech slated for 4:00 pm at Littlejohn Coliseum.