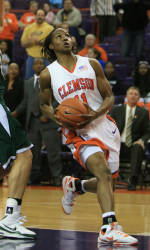 Coach Andy Landers challenged his Georgia players after a sloppy start and the Lady Bulldogs responded in a big way.

Porsha Phillips led a balanced offense with 15 points and Georgia dominated the second half for a 67-50 victory over Clemson on Monday night at the Arena in the Gwinnett Center.

Christy Marshall scored 13, Angela Puleo 12 and Ashley Houts 11 as the Bulldogs improved to 9-2. Lele Hardy scored 20 points for Clemson, which had a six-game winning streak snapped and fell to 8-3.

“We got a little lazy with the lead and they definitely picked the intensity way up,” Clemson coach Cristy McKinney said. “We didn’t respond.”

Clemson led by 12 points twice in the first half, holding Georgia without a field goal for nearly 6 minutes in one stretch. But Georgia closed on an 8-0 run to cut the Clemson lead to 32-28 at halftime and then took charge in the second half.

“Coach told us to get back focused and do the things we were supposed to do,” said Phillips, who had nine rebounds and four steals. “Once we did that, we were OK.”

“Coach challenged us,” Poleo said. “We made up our minds to turn it around and we did,”

Georgia made just four of its first 17 shots from the floor, but finished at 40.7 percent to 32.2 percent for Clemson. Puleo was 3-for-8 from behind the 3-point arc.

“We’ve got to get our respect back,” Landers said. “This was a good win for us. We started off with way too many turnovers. Once we got that under control and picked things up, we starting playing like we can.”

Angel Robinson had 12 rebounds for Georgia, which had a 43-37 edge in rebounding. Hardy led Clemson with eight rebounds and April Parker had seven.

A crowd of 3,361 attended at the game at Gwinnett Center, located about 25 miles northeast of Atlanta. It will be the site of first-round games in the NCAA Tournament for the first time on March 21 and 23.