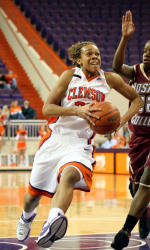 CLEMSON, SC – A 9-0 Boston College run midway through the second half erased the only Clemson lead of the night and the Eagles came away with the 68-63 victory on Monday at Littlejohn Coliseum.

The Lady Tigers (9-12, 2-4 ACC) had just outscored the Eagles, 10-2, during a three-minute stretch to take a 44-41 lead at the 13:23 mark. A Whitney Hood jumper in the paint energized the Clemson effort as back-to-back steals of Boston College inbound passes led to a pair of lay-ups for Morganne Campbell.

Following a jumper by the Eagles’ Rebecca Miles, Lele Hardy and Sthefany Thomas both knocked down shots for the Lady Tigers. However, Boston College’s run put it ahead by six and the margin grew to eight with six minutes remaining in the game.

Hardy cut the deficit to two at 58-56 with a lay-up at 2:39, but the Eagles responded to every Clemson basket and converted free throws down the stretch for the victory.

Hardy finished with nine points, eight assists and six steals on the night.

“Lele gave the team a spark with her steals,” Clemson Head Coach Cristy McKinney said. “She is a great defensive player and makes great plays at key moments.”

Campbell led the team with 13 points, while D’Lesha Lloyd and Thomas each added 11 in the effort.

“Over all I was very pleased with how the girls played,” McKinney added. “Our biggest flaw was our rebounding. We should have more defensive rebounds, limiting their shots.”

The Eagles’ Carolyn Swords pulled down 10 rebounds to notch a double-double with 18 points. Brittany Johnson also hit double figures for Boston College with 11 on the night.

Clemson will return to action on Thursday night against Georgia Tech. The Lady Tigers and Yellow Jackets are slated for a 7:00 pm tip from Atlanta, GA.