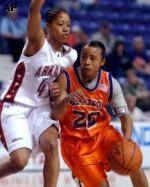 MANHATTAN, Kan. (AP) – Shamika Christon scored 36 points as Arkansas beat Clemson 78-68 Friday night and advanced to the second round of the NCAA tournament for the second straight year.

Arkansas, the sixth seed in the Mideast, will play the winner of Kansas State and Kent State on Sunday.

Clemson (17-12) cut the lead to three with 14:27 remaining in the second half, but Christon scored eight points during a 10-0 run that put the Lady Tigers away.

Christon made 13 of 19 shots, and the Lady Razorbacks scored 21 points off Clemson turnovers.