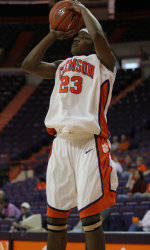 CLEMSON, SC – Shante Williams converted two free throws with seven seconds remaining in the game to put her Florida State team on top by one, and a final Clemson attempt by D’Lesha Lloyd rattled around the rim but refused to fall, as the Seminoles (15-3, 4-0) posted the 61-60 victory over the Lady Tigers (9-10, 1-3 ACC) on Thursday night.

Clemson jumped out to an early 7-2 lead, but Florida State quickly responded for a 10-9 advantage on a lay-up by Mara Freshour at the 14:53 mark. The Lady Tigers then scored nine unanswered points to regain control. They widened the gap to as many as 10 points on three difference occasions, with the last coming at the 9:10 mark on a jumper by Taylor, before a 12-3 Seminole run cut the lead to just one at 28-27 with 2:36 remaining in the half. Two field goals and a free throw by Lloyd in the final minutes put Clemson back on top by six, 33-27, at the break.

The Lady Tigers’ momentum carried over to the beginning of the second half as they increased their lead to a game-high 11 points on a short jumper in the paint by Brown at the 13:27 mark. However, Florida State held Clemson to just one field goal in the next four and a half minutes to knot the score at 46-46. The Seminoles took their first lead since their 10-9 advantage in the opening minutes of the game, as Britany Miller completed a three-point play with 8:53 left.

The score remained tight but the Lady Tigers took the lead at 50-49 on another Brown basket at the 7:07 mark. The teams were then tied three times before Lele Hardy stole the ball from the Seminoles and hit a shot with 1:22 remaining that gave Clemson a 60-56 advantage. Freshour then drained Florida State’s only three-pointer of the night with 46 seconds left to make it a one-point game and Williams clinched the victory for the Seminoles from the foul line.

The Lady Tigers will travel north this weekend as they will take on the Boston College Eagles. The two teams will battle at the Conte Forum in Chestnut Hill, MA on Sunday at 2:00 pm.