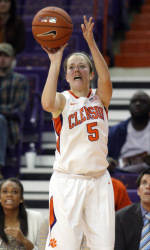 Wake Forest pressured Clemson defensively, scoring 34 points off 25 Tiger turnovers. Clemson was able to shoot .439 from the field, but Wake shot an efficient .509 from the floor with just 12 turnovers.

Clemson was able to find much of its offense from the post, where Quinyotta Pettaway and Lindsey Mason combined for 41 points, as each registered season-highs in scoring. Pettaway poured in a career-high 24 points on 11-20 shooting, including 16 points on 8-10 shooting in the second half. The North Carolina native is averaging 20.0 points and 10.5 rebounds in the past two games played in her home state.

Mason came up two points shy of a career-high, as she knocked in several jumpers and went 5-6 from the line to total 17 points. More notably, however, is that the senior from Woodstock, GA turned away four shots, moving her alone into second in Clemson history with 133 career rejections. She played a career-high 34 minutes on Sunday, and had two assists and just one turnover, while hitting 6-8 from the field.

Gramlich hit double-figures for the fourth straight game, as the freshman nailed three three-pointers on her way to 13 points in a team-high 36 minutes. She also had a personal-best 10 rebounds, giving the guard her first career double-double. She is Clemson’s second-leading scorer in ACC play, up to 10.3 points per game.

Freshman guard Chelsea Lindsay dished out eight assists, two more than her previous best of six, which she achieved three times. She tallied 34 minutes in the game, matching her season average, which leads the Tigers and ranks fifth in the ACC.

Clemson cut what was a 17-point first half deficit to nine at 48-37 just after halftime as Nikki Dixon nailed her third three-pointer of the game from the wing. But Wake Forest responded out of a timeout just 50 seconds into the half with a 15-3 run from which the Lady Tigers could not recover. Mason and Pettaway to hit Clemson’s final nine field goals.

Clemson will take on Duke on Friday at 8:30 pm in a televised contest against the top-ten ranked Blue Devils. Tickets are available for just $1.00 as Clemson will try to Pack the House.